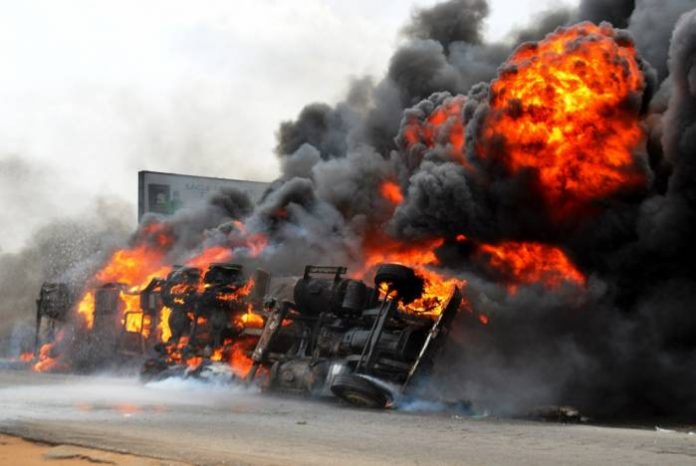 A woman, her daughter and a vulcaniser on Saturday suffered varying degrees of burns after a petrol-laden tanker fell and exploded at Atatun, Ijaiye-Tutun, in Abeokuta on Friday evening.

According to an eyewitness, the victims were immediately rushed to the Federal Medical Centre, Idi-Aba, Abeokuta.

No fewer than five houses and several shops were burnt in the incident.

The News Agency of Nigeria quoted an eye witness, simply identified as Mrs. Olufote, as telling newsmen that the incident happened when the fuel tanker suffered a flat tyre.

She said the driver had parked beside the road to fix the flat tyre unaware that he was parking in a sloppy area.

The eyewitness added that as he was alighting the vehicle to negotiate with a vulcaniser beside the road, the tanker tilted and the container fell.

“The tanker had a flat tyre and in the process of trying to fix it, the tanker exploded and even the vulcaniser who was to work on the tyre was affected.

“The vulcaniser was fixing a motorcycle tyre when the tanker exploded.

“There were many houses that were affected, with some burnt to ashes. In fact, a mosque was also affected,” she said.

Mr. Babatunde Akinbiyi, the Public Relations Officer of the Traffic Compliance and Enforcement Corps (TRACE), confirmed the incident to NAN on Saturday.

Akinbiyi said the fire was later put out after some houses had been burnt.

The TRACE spokesman stated that the tanker driver erroneously parked in a sloppy area while trying to fix his tanker’s tyre .

According to him, the container removed from the hook, fell and exploded.