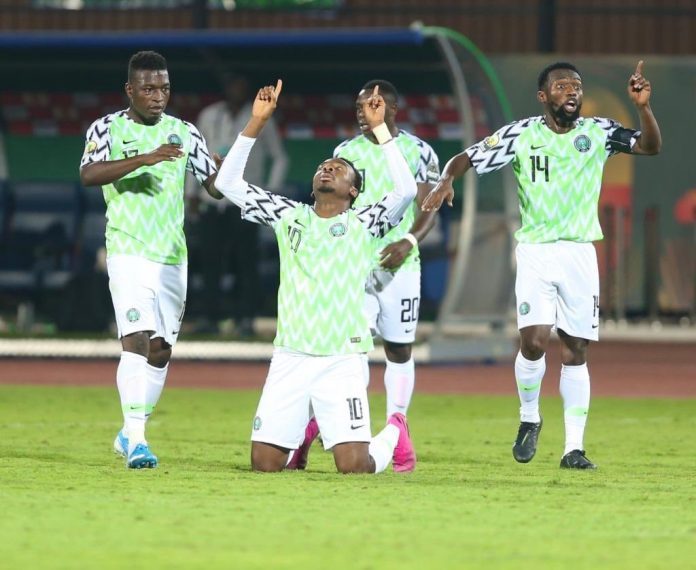 Cup holders Nigeria returned to contention for a place in the semi finals of the 3rd Africa U23 Cup of Nations after coming from a goal down to steamroll Zambia 3-1 in Cairo on Tuesday.

With a quarter of an hour gone, it appeared to be going away for the defending champions as they sat pointless and at the bottom of Group B.

But goals from three former U17 World Cup winners shot Nigeria to second in the group and with a good chance of toppling leaders South Africa when both clash at the same Al Salam Stadium on Friday evening.

Zambia, who drew 0-0 with South Africa in a southern African derby on the opening day, were given a morale-boosting shot when Patson Daka, who also features for the country’s senior team, Chipolopolo, scored in the 11th minute to increase the worries of Nigerians.

However, Orji Okwonkwo levelled for the Olympic Eagles five minutes later, and then Kelechi Nwakali, captain of the Nigeria U17 team that won the FIFA World Cup in Chile four years ago with Okwonkwo also a major act, slammed in a superb free kick in the 65th minute to put Nigeria ahead for the first time in the tournament.

Germany –based forward Taiwo Awoniyi, who also won the U17 World Cup, in 2013, and who arrived in Egypt only on Sunday night, made it three on the stroke of 90 minutes to make Nigerians breathe easier.

South Africa, 1-0 winners over Cote d’Ivoire in the group’s earlier match, top the pool with four points (following their 0-0 opening day scoreline with Zambia), and will contend with the inspired Nigerians on Friday.

Cote d’Ivoire, on three points like Nigeria but with less number of goals, will battle Zambia, with only one point, on Friday.

Victory against South Africa will steer Nigeria into the semi finals, and closer to a ticket to the Men’s Football Tournament of next year’s Olympics in Tokyo.

The three top–placed teams at the tournament will qualify to represent Africa in Tokyo.