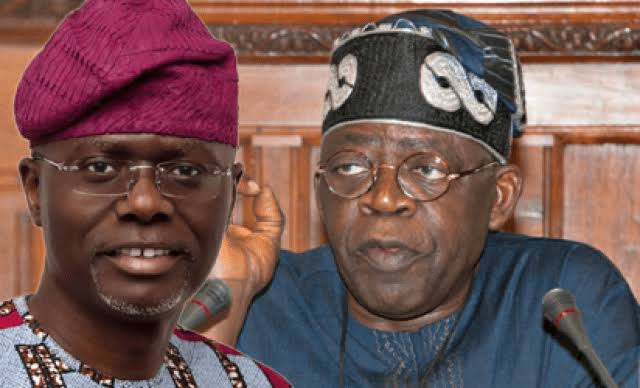 The National Leader of the All Progressives Congress (APC), Asiwaju Bola Ahmed Tinubu and the Minister for Works and Housing, Mr. Babatunde Fashola, on Friday graced the cabinet retreat organised for members of the Lagos State Executive Council (SEC) and Permanent Secretaries.

The appearance of the two former governors was aimed at boosting the morale of the cabinet members and to equally share experiences based on practical knowledge in the art of governance.

The retreat, which was at the instance of the Lagos State government, was to enable cabinet members and Permanent Secretaries key into the policy thrust of Gov. Babajide Sanwo-Olu’s administration.

Tinubu, who served from 1999 to 2007, urged Sanwo-Olu and his team to make welfare of the people the cornerstone of the administration’s social development programmes.

The APC leader reminded the cabinet members of the “difficult task” they had in hand, but challenged them to deploy their expertise for the realization of the APC programmes for the state.

Administering the affairs of a society endowed in ethnic diversity, Tinubu pointed out, goes beyond a possession of talent.

Character, the APC leader said, is key to the success of any leader at helm of affairs of any multi-ethnic society.

He said: “Many books on leadership and administration have been written by great thinkers which focused on talent of individuals. But, is leadership about talent alone? I say no. Talent can only give you the opportunity to shine and get recognition among your peers. But it cannot pave the way for success. Talent without character is an effort to nowhere.”

Tinubu charged the cabinet members on teamwork, stressing that the success of the administration in its areas of priority was not negotiable.

He said, although Lagos still confronts some challenges in key sectors, the challenges should be converted to opportunity to drive development of the state.

The APC national leader observed that successive administrations in Lagos had been implementing a development masterplan initiated by his administration, but he also pointed out that the blueprint was not inflexible.

He urged Sanwo-Olu and his team to tinker with the masterplan in driving more development in the state.

He believed the success of the administration would be dependent on the far-reaching reforms that would turn around the listed areas.

He said leadership required courage and boldness to dare, but urged them to be prudent in the discharge of their duties.

Fashola, who spoke on ‘Personal Perspective on Leadership’, saluted the courage of the Commissioners and Special Advisers to accept the roles, saying that the appointees had signed up for “tough task.”

Fashola said public office was created to solve problems facing the people and not to show off, adding that the Sanwo-Olu administration must design a public communication strategy that would make citizens defend the government before becoming agitated.

The minister also advised the cabinet members on teamwork, which he said would inspire trust, dependability, respect and civility.

He also engaged the Executive Council members on how to smoothen the state government’s relationship with the Federal Government.

After his speech, Tinubu recommended a leadership book titled: ‘Marginal Gains And Secret Of Good Performance’, to the cabinet members to guide in the administration of the state.

The Deputy Governor, Dr. Obafemi Hamzat, who made a vote of thanks on behalf of the Executive Council, described Tinubu as a blessing to Africa, noting that the APC national leader’s leadership impacts transcended the continent.

Sanwo-Olu who spoke earlier noted that the new cabinet members had a rare opportunity of receiving hands on training from two most experienced and highly qualified administrators in former Governors Bola Tinubu and Babatunde Fashola.

He, however charged the Executive Council members to utilize all that had been learned for the betterment of the average citizen of Lagos.

Other speakers at the Day 3 session included the Director General of the Budget Office, Mr. Ben Akabueze, who took the participants through on the structure of the state’s budget.