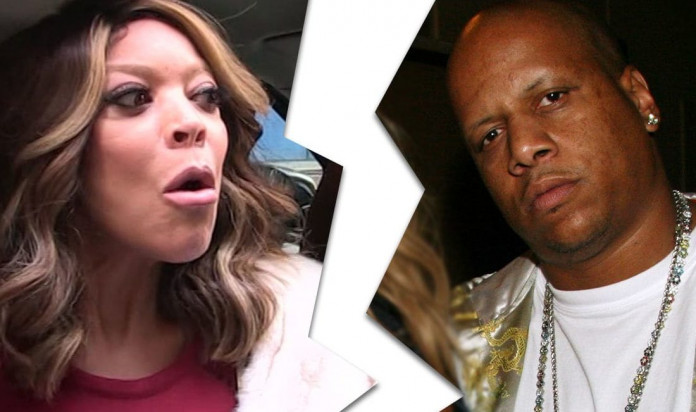 Lawyer for the 54-year-old host, who is worth an estimated $60 million, confirmed on Thursday that she is splitting from her husband of nearly 22 years Kevin Hunter, 47.

Williams has been spotted without her wedding ring over the past few weeks in the wake of massage therapist Sharina Hudson, 33, giving birth in late March.

Hunter was served with the divorce papers Thursday morning at the studio, according to TMZ. Extra security was hired in case Kevin, known to have a temper, got enraged on set. But there were apparently no outbursts.

The split will most likely be contested as Hunter is an executive producer on Williams’ TV show and told Hudson that he couldn’t afford to split from Wendy because she paid all the bills, a source previously told DailyMailTV.

Williams filing for divorce comes after DailyMailTV revealed she had been living in a sober living home in Queens, New York, to be treated for an addiction to booze and prescription drugs.

Her downward spiral was sparked in December after she learned Hunter was still seeing Hudson, his mistress of more than a decade.

Williams seemed to be in good spirits on her morning show on Thursday.

A source previously told DailyMailTV that Wendy was keeping her ring on during filming until she worked out what to do with Hunter, but was taking it off once outside of the studio.

They said at the time: ‘Wendy is considering divorcing Kevin. She’s really distraught over the situation, she knew about Sharina but didn’t think a baby would arrive, she didn’t think Kevin would go this far, she’s lost and everyone is worried for her.’

Williams has previously discussed difficulties in her marriage on her show, saying: ‘Marriages are not easy. And don’t ask me about mine until you see [my wedding ring] gone – it ain’t going anywhere, not in this lifetime.’

A recently resurfaced excerpt from Williams’ memoir reveals that she vowed to leave her husband if another woman had his child.

Wendy wrote in her 2001 memoir it would be one of the only things that would make her part ways from Hunter once and for all after revealing he’d already cheated on her earlier on in their relationship.

Williams – who married her manager in 1997 and has a son named Kevin Hunter Jr with him – wrote in Wendy’s Got the Heat: ‘The only thing that would make me walk out for good is if he lied about anything – if he was in love, if she was just as successful at what she does as I am in my career, if she had his baby.’

Williams’ marital problems are the root of cause of her addiction to booze and pills, kicking off last December when the star hired a private investigator to spy on Hunter who she suspected was still carrying on with Hudson, DailyMailTV revealed last month.

In 2017, Hudson had been at the center of a DailyMailTV expose revealing her ten-year affair with Williams’ husband.

After being told the secret affair was still very much alive, the TV host confronted Hunter demanding to know why he was still seeing the 33-year-old qualified massage therapist.

During the heated clash, it’s believed Williams fell and hit her shoulder on the ground, suffering a hairline fracture.

Devastated, Williams quickly plunged into a depression while recovering from the injury and began drinking heavily. During the time away from hosting her show, Williams’ drinking – coupled with powerful pain medication – proved a potent cocktail. Williams, who has a history of drug addiction, became hooked.

After returning from rehab in Florida, Williams began living in a sober home in Queens, which is situated above a barbershop in an unassuming red brick building in Long Island City.

But when news broke that Hudson had given birth to a little girl in late March, she checked herself out of her sober living home and started drinking – eventually being found by her team who took her to the hospital to sober up.

It’s understood the star’s sober coach, who had been with her 24 hours a day, raised the alarm.

A studio source told DailyMail.com: ‘She was in a bad way and disappeared from the studio after her show Monday.

‘She went back to the sober house only to check herself out and decided to start drinking.’

They continued: ‘It’s not clear where she went but she headed in the direction of her home in Jersey and managed to find alcohol along the way.

‘Word got back to the studio and there was panic and concern, everyone was looking for her, no one knew whether there would be a show today.

‘She was eventually found and was drunk, she was immediately taken to the hospital.’

Although Hudson has made several ultimatums to Hunter, insisting he leave Williams so they can settle down and start a family together, Hunter told her he can’t leave Wendy because she paid all the bills.

‘Kevin is in love with Sharina but he told her he can’t leave his wife, but the only reason he is still with Wendy is because he and Sharina can’t take care of themselves – they need her money,’ a source told DailyMailTV.