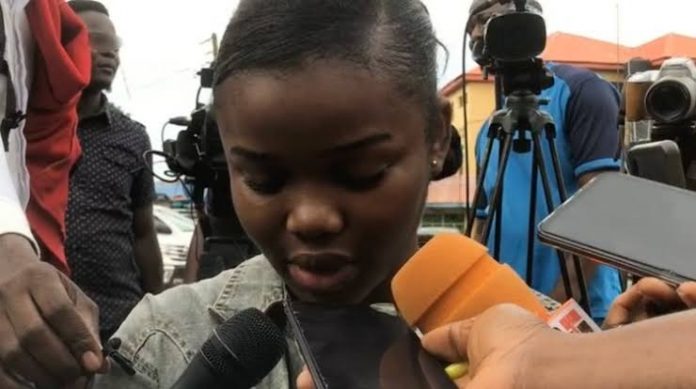 A top police source, who pleaded anonymity because he was not authorised to speak on the matter, told PUNCH Metro that the suspect and her father were arrested at their residence, No. 57 Akinwunmi Street, Alagomeji, Yaba, on Wednesday.

The source said the father was arrested for resisting Chidinma’s arrest and for becoming violent with policemen, who went to apprehend her.

The source added that the man did not believe that his daughter committed any crime until she confessed on Thursday, adding that he was being detained at the State Criminal Investigation and Intelligence Department, Panti, Yaba.

“She (Chidinma) stays with her dad. Her dad and mom don’t live together. Her father was arrested on Wednesday, because he resisted his daughter’s arrest. He never believed that his daughter committed any crime until Thursday. He is at Panti as we speak, but he was not paraded today (Thursday),” the source stated.

Chidinma, who claimed to be a 300-level student in the Department of Mass Communication, University of Lagos, confessed to stabbing Ataga to death while being paraded at the state police command headquarters, Ikeja,.

A lecturer in the department, who spoke to one of our correspondents on condition of anonymity said, “I know her (Chidinma) because of her beauty and innocent look. She is an introvert to the core.

“Left for her striking beauty, she is not likely to be noticed by anyone, because she doesn’t talk in class.”

Another lecturer also confirmed that Chidinma is a 300-level student in the department.

“Yes, in our group chats, where there are several professors, it was confirmed that she is a 300-level part time student of Mass Communication, UNILAG,” the lecturer said.

One of the classmates, who spoke on condition of anonymity said, “Yes, she (Chidinma) is a 300-level part time student of Mass Communication. I know her, but we are not on talking terms; she doesn’t interact with many people. She is a recluse.

“She is a cool girl, who comes for lectures and leave afterwards; she has few friends, who she talks to. I don’t really know much about her.”

Another student said he had not seen her in the current semester, adding that their lectures could not hold on Thursday as the lecturers did not turn up.

“I have not seen her this semester since we resumed on May 10. We were supposed to have lectures today, but the lecturers did not come. Likewise, her issue has been a major topic on our WhatsApp platform; it was a chaotic debate as members took sides,” he said.

The students said they usually receive lectures between 5pm and 8.30pm weekdays.

The spokesperson for UNILAG, Nonye Oguama, refused to confirm if Chidinma was indeed a student of the institution.

When contacted by PUNCH Metro after the parade, Oguama said she would not respond and slammed the media for publishing Chidinma’s claim of being a student of the institution.

“You did not contact me before. You are just doing so now after you had published it on your website. We have no comments,” she angrily responded.

When challenged with the fact that the parade was a live broadcast, the UNILAG spokesperson remained adamant, insisting that the name of the institution should not have been mentioned.

During her parade, Chidinma confessed to withdrawing N380,000 from the deceased’s account to pay her school fees.

The state Commissioner of Police, Hakeem Odumosu, had earlier said the 21-year-old undergraduate was tracked for 48 hours and was arrested at her parents’ residence in the Yaba area of the state on Wednesday.

He stated that casual workers cleaning the building, where the incident took place, discovered Ataga’s remains in the service apartment.

Odumosu said, “The victim, one Usifo Michael Ataga, happened to operate a media house. The lady, Chidinma Ojukwu, 21, a 300-level Mass Communication student of the University of Lagos, checked into the service apartment in Lekki with the man on a Sunday.

“They were there together as friends, but on Tuesday, she departed and left the man inside. So, when the man did not come out on Tuesday and Wednesday, those who were evacuating the trash bins went in to do their normal duty and discovered that the door to the apartment was half opened.

“When they entered, Ataga was found on the floor in a pool of blood. He wore only his pair of boxers. So, we started our investigation and we were able to track the prime suspect and got her arrested. She has confessed to the crime.

“She said the drugs and alcohol that both of then took got them high and they were trying to have fun, but she resisted and the man insisted on having his way and that led to the fracas. She reached out for the kitchen knife and stabbed the man twice in the neck and once in the stomach. After he died, she took his belongings and fled.”

Chidinma told PUNCH Metro that Ataga became violent after she turned down his request for more sex, adding that she stabbed him under the influence of drugs and alcohol.

She said, “I checked for the place we lodged in online on Sunday and sent the details to him and he paid. On Monday, we were together drinking and smoking, we had fun and so I went to get food. On Tuesday, he was trying to make advances at me, but I was tired and he became violent and forced his way and I gave in.

In the afternoon, we smoked and ate. We became high and I wasn’t happy with the first round of sex; so, I was on my own smoking, drinking and eating my food when he came to me, while I was watching a movie.

“I told him I was not happy with what he did the first time. I told him he was not assisting me with anything, but was playing around with me. He told me to take his ATM card and withdraw any amount I wanted and gave me the PIN, but I told him that was not what I meant.

“So, he became violent; I was defending myself and at some point, he hit my head on the wall and I retaliated. He was choking me and I was on the kitchen cabinet, so I stretched out and grabbed a knife and stabbed him twice in the neck and once in the stomach.”

When Ataga became weak, Chidinma said she fled the apartment and withdrew money from his account for her school fees.

She said, “We smoked SK and Loud. While he was lying there, I changed my cloth, looked for the key from where he kept it, and left the room. When I left, I didn’t reach out to anybody. I didn’t feel good about what I did.

“I withdrew N380,000 and not N5m from his account. I feel a lot of remorse. I wanted to use the money I withdrew to pay my school fees. I felt disappointed when the police arrested me at my parents’ house and it was when I was arrested around 10pm that my parents got to know about the incident.

“I live with my parents; I left home on Sunday and told them that I was going for ushering job. I used the foreign number I generated in texting the owner of the apartment.”