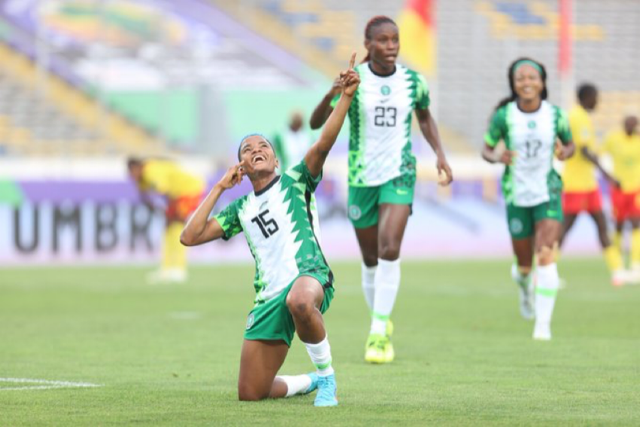 Nigeria’s Super Falcons on Thursday in Casablanca qualified for the 2023 FIFA Women’s World Cup finals to be hosted by Australia and New Zealand.

A lone goal by Rasheedat Ajibade against Cameroon’s Indomitable Lionesses steered the Super Falcons to the semi-finals of the ongoing Women’s Africa Cup of Nations (WAFCON) in Morocco.

In this quarter-finals game, midfielder Ngozi Okobi-Okeoghene made a bold run at the Cameroonian defence supported by twists and turns with the ball landing at the feet of Ifeoma Onumonu.

Onumonu, heaved the ball into the penalty box for Ajibade to nod past Ange Bawu for the match’s only goal in the 57th minute.

The News Agency of Nigeria (NAN) reports that the nine-time champions dominated a physical game right from onset.

They could have led by at least two goals in a first period they created chance after chance only to be undone by near misses.

In the seventh minute, Onumonu headed Okobi-Okeoghene’s well-weighted free-kick over the sticks.

She had scored the first goal in the 2-0 defeat of Botswana in Group C which rejuvenated Nigeria’s campaign following opening game defeat by South Africa.

In the 24th minute, Onumonu and Ucheibe were involved as a melee ensued in the Lionesses’ vital area, but Bawu was up to the task.

The two teams abbreviated each other’s opportunities with very close marking in a turgid second half.

However, after Nigeria scored, Gabrielle Onguene lashed at the Nigeria goal but it went far away.

Ajibade’s headed goal, her third of the tournament, took Nigeria to eight goals in the championship with only two conceded.

Both goals were against South Africa, and now their reward is a potentially-explosive semi final duel against hosts Morocco.

Ajibade who plays for Atletico Madrid of Spain was later named the Woman of the Match.

NAN reports that Nigeria’s Super Falcons have now become the 15th team to qualify for the ninth FIFA Women’s World Cup finals scheduled for July 20 to Aug. 20 in 2023.

The rest are Spain, Sweden, Denmark, U.S., Morocco and Zambia.

The 16th team will emerge from the fourth and final quarter-final match at the ongoing WAFCON in Morocco, between South Africa and Tunisia.

The fifth- and sixth-placed teams at the ongoing WAFCON in Morocco will have another shot at qualifying for the World Cup.

They will be joined by eight other teams for a Playoff Tournament early next year.

Nigeria is one of only six teams —- including U.S., Germany, Brazil and Japan —- to have played in every edition of the Women’s World Cup finals since its launch in China in 1991. (NAN)