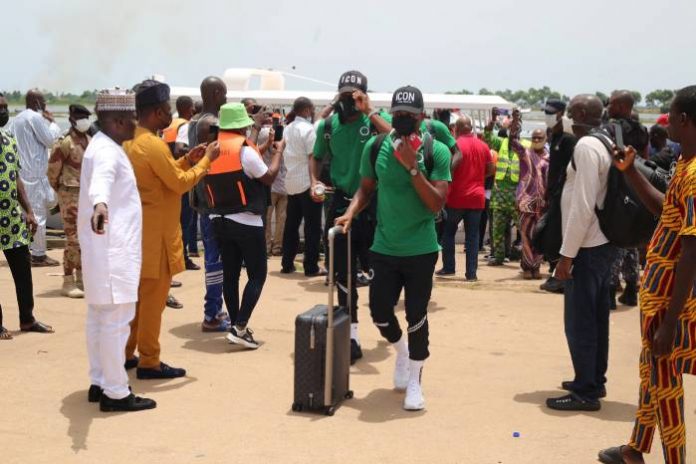 The Super Eagles have arrived in Cotonou ahead of their 2021 Africa Cup of Nations (AFCON) qualifying match against the Squirrels of Benin Republic.

A tweet on the team’s official account said they arrived in Cotonou Friday after a short boat ride from Lagos.

The Super Eagles are scheduled to face the Squirrels at the Stade Charles de Gaulle In Porto-Novo on Saturday.

The team was expected to hold a training session inside the Stade Charles de Gaulle later Friday before their encounter against the Squirrels.

Sierra Leone, with three points, are scheduled to begin Saturday’s action with bottom-placed Lesotho at 3 p.m., and Nigeria are up against Benin from 6 p.m.

This means the match in southern Africa would have ended before the group leaders take to the pitch.

A draw in Maseru will guarantee the Super Eagles passage to the 2021 AFCON to be hosted by Cameroon in January 2022.

The Super Eagles will take on Lesotho in their final qualifying game on Tuesday at the Teslim Balogun Stadium in Lagos.(NAN)