As the Premier League trophy finds home in Uyo following Akwa United’s first victory, it is in fulfilment of age long dream of the founders of soccer. While globally England introduced the game, in Nigeria it was first played in Calabar, the political father of Uyo.

Akwa United beat MFM 5-2 to emerge champions, with a game left. The Promise Keepers were FA Cup champions in 2015 and again in 2017. Calabar had won it in 1954. Politically, Calabar and Uyo are in the same league. Nigerians refer to people from Cross River and Akwa Ibom as Calabar.

Soccer came to Nigeria in March 1902 through James Luke, principal of Hope Waddell Training Institution, Calabar. The school was founded in 1895 by Scottish missionaries. On June 15, 1904, the school team defeated a British squad, HMS Thistle 3-2. The foreigners were sailors.

That was the first match on Nigerian soil. It was also the first international  game. It is remarkable that the English FA which emerged in 1863, is the oldest in the world. And the first soccer competition came in 1871. The same  Brits who introduced soccer also took it to Calabar.

Ever since, there is always something special about that Calabar axis, from Uyo to Ikot Ekpene and Eket down to Oron. The Captain of the 1949 UK Tourists, Richard Etim Henshaw, came from Calabar. Three other team members, Edet Ben, Mesembe Otu and Sam Ibiam had Hope Waddell background.

The man who captained Green Eagles to their African Nations Cup debut in 1963, Asuquo Ekpe hailed from the same area. The first Nigerian to make the FIFA Executive Committee, Oyo Orok Oyo, was a Calabar man.

There are record making goalkeepers too. In 1983, Patrick Udoh became the first Nigerian to keep in a FIFA tournament. Ten years earlier, Eyo Essien was in goal as the Green Eagles lifted their first continental gold, the All Africa Games in 1973.

Competitive soccer began in Calabar in 1906 with the  Beverly Cup. Lagos did not get to play Europeans until 1914 when Frederick Baron Mulford, Games Master at Kings College, Lagos, organised friendlies with British workers based in Lagos.

Credit must also go to Calabar for improving the game in Lagos. Nnamdi Azikiwe, a product of Hope Waddell, moved to Lagos and made a bold statement. He played for Diamond FC in 1923 with Mulford. In 1938, Zik founded Zik Athletics Club (ZAC).

Azikiwe  built a stadium in Sabo, Yaba, Lagos in 1940 and was also a referee. One of his players, Sam Akpabot  who later became a Professor had his roots in Calabar. Akanu Ibiam left Hope Waddell to captain Kings College.

Students from Calabar were outstanding. The Trenchard Cup, introduced in 1939 helped the game. In 1954, St. Patrick’s College, representing the town won the FA Cup. The boys dethroned defending champions, Kano with a 3-0 score line.

There are important historical names attached to Calabar. James Edet Wey moved to Lagos, won the FA Cup with Marine, played left back for Nigeria, joined the Navy and became Chief of Naval Staff and later Chief of Staff Supreme Headquarters.

Another Service Chief, Luis Orok Edet became chairman of the Nigeria Football Association as Inspector General of Police. Michael Ani played for Calabar against Lagos in1939. About four decades later, he was Chairman of the Federal Electoral Commission. 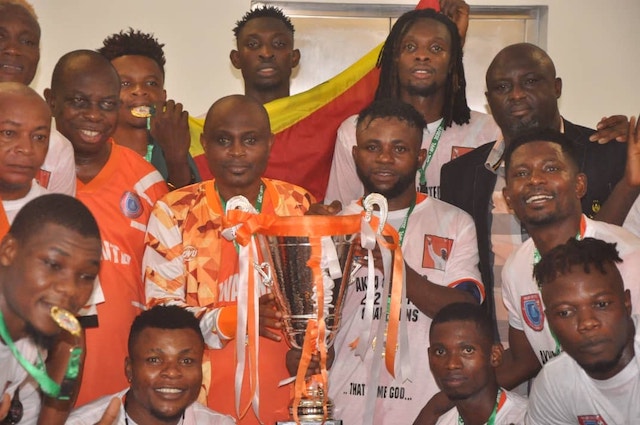 The first time a Calabar team visited Lagos, the story did not sound sweet. Their hosts battered them like babies. That was in 1939. From there a Calabar man set up a team in Eko known as Ekang Eleven.

Attempts were made to make Calabar matter in soccer as from the 1970s. Teams like Rovers, Customs, Acada United, Jetimo of Uyo, Mobil Pegasus, Eket and Ibom Stars tried their best. Calabar Rovers were to go international in 1986  but Nigeria withdrew from WAFU in 1985.

Akwa United emerged. The beginning was not so tidy. Then Governor Udom Emmanuel ascended the throne. Things started to happen. Paul Bassey moved in. Two FA Cups came. International exposure was sure.

Now for the very first time, the League has been won. At long last, soccer has come back home. Delay they say, is not denial. Orange is the colour in Uyo.