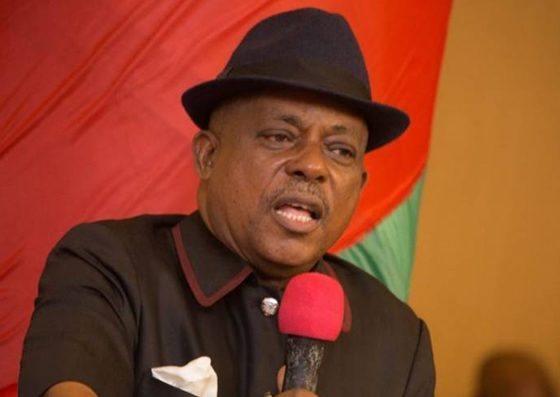 The National Chairman of the Peoples Democratic Party, PDP, Prince Uche Secondus, has asked Nigerian muslims to use the solemn period of Sallah to present Nigeria’s precarious situation to Allah for his prompt intervention.

Prince Secondus said in a message to mark the Eid-el-Kabir festivities by muslims that only justice and fairness, the type only God gives would rescue the nation from final damnation.

The PDP National Chairman said that the blood of thousands of innocent souls being wasted daily in our land should be enough mitigation to plead to God to save this country from destruction.

The National Chairman said in a message from his media office signed by his Media Adviser, Ike Abonyi, that Nigerians should also use the period to offer fervent prayers for the unity and stability of the nation which is seriously under threat due to poor leadership.

Prince Secondus said that the intense prayer for our country has become very necessary more than ever before as our nationhood is in dire need of divine intervention to survive, especially as citizens rights are being blatantly trampled upon by the new face of despotism in our polity.

The PDP leader noted that this Sallah period coming at this critical time in the national life, provides the citizens an opportunity to put aside every political, religious and ethnic sentiments and unite against their prevailing common challenges.

“We know as a fact that this is not what Nigerians desire from democracy especially given what happened on February 23, 2019, but a period like this solemn time provides the people an opportunity to ask Allah to allow the will of the people to prevail.

“It is a statement of fact that this is one of the worst times in our history as a country where lives are valueless and freedom denied to persons holding opposite views in a national discourse by an obviously intolerant political leadership,” he added.

Prince Secondus, however, admonished the people even in their indignation, frustration and disappointments to seize the chance of this time and return to God in supplications to change our situation.

“I charged you not to allow the challenges of now make you lose your dignity and modesty as a people and miss the essence and meaning of Eid-el-Kabir festivity and the divine succour it brings, in assuring us that there is always a light at the end of every tunnel.”

In the face of the overwhelming challenges, Prince Secondus urged Nigerians not lose faith in the country but to recommit their individual and collective security and economic welfare into the hands of God.

The National Chairman also, on behalf of the PDP National Executive Committee, wishes all Nigerians joyful and peaceful Sallah celebrations.