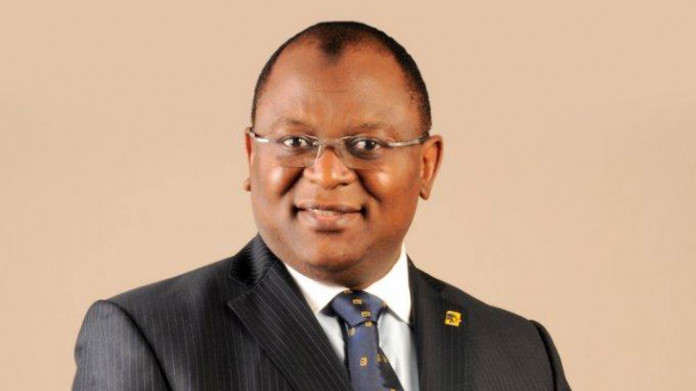 A season of arbitrary sack

Despite claims, it followed due process in disengaging staff across Nigeria, The NEXT EDITION investigation shows First Bank of Nigeria Limited (FBN) indiscriminately sacked over 300 of its core staff.

The bank, which is grappling with the backlash of sacking over 1000 contract staff through text messages, is also caught in the mesh of a controversy for sacking core staff against industry best practices.

This newspaper had uncovered a muddled disengagement of staff across the Federation by the bank’s contractor, Whyte Cleon Limited, in an investigation which spanned weeks.

But further investigation shows Nigeria’s oldest indigenous financial institution with 120 years of operations, promoted over 3000 staff and sacked 300 others in one night.

Although the bank indicated it will pay the affected staff, our investigation showed it never kept that promise over one month after it laid them off.

“You will be paid your salary and due allowance up to and including the date of termination and one-month basic salary in lieu of notice,” a part of the termination letter obtained by this newspaper reads.

At the time of filing this report, none of the disengaged staff has been paid their due salary and allowance and the one-month basic salary in lieu of notice a indicated in the letter.

However, one of the affected staff who pleaded not to be named told this newspaper she was employed by the bank in May 2000.

The staff, who was an assistant manager, said she was never warned on account of poor performance or placed on performance probation before the sack.

The staff who had worked in one of the bank’s branches in Port Harcourt, Rivers State, said, “I went to work on Friday, August 11 but discovered I couldn’t access my mailbox and I knew immediately something had gone wrong.”

“It was not until Sunday, August 13, some of our colleagues still in service informed me to go to the area manager’s office to collect my termination letter.

“I was never warned on grounds of poor performance and never placed on performance probation and can’t imagine why I was sacked after working so hard and for so many years for First Bank.”

Another staff who gave his name simply as Ibrahim, said he was an assistant manager in one of the branches in the North-Central zone before he was sacked on August 11.

Having worked with the premier financial institution for close to 20 years, he said he knew the bank’s policy on recruitment and disengagement.

“The bank normally has a procedure for disengaging staff based on performance but for some reasons did not follow the due process this time,” he argued.

“Most of us wanted to sue but the union asked us to wait for them to try and negotiate with management for a severance package.

“This is the package that is being negotiated up till date and we are hearing rumours that there have agreed to pay some percentage of our annual net salary.

“After he approved 300 staff to be sacked, the MD left for Hajj in the Holy Land. I learnt he returned to the country last week Thursday,” Mr. Ibrahim said.

Emmanuel Obasi, another core staff of the bank affected in the purge told The NEXT EDITION, he has lost confidence in the ongoing negotiation with the management of bank.

Mr. Obasi argued if the bank could unilaterally lay off the core and contract staff who made invaluable contributions to its successes through the years, there was no basis for negotiation.

He insisted on taking a legal action against the management of the bank, adding the purge might be symptomatic of a severe rot within the system.

Mr. Obasi lamented the hardship caused by the sudden termination of his employment and that if his colleagues, saying they never saw the action coming.

“Children are going back to school and there’s no money as even the statutory one month in lieu of basic and one-month salary has not been paid,” he lamented.

“I read your publication on the disengaged non-core staff and all you wrote were true. The head of media was just lying that people were laid off according to industry best practices,” he said.

“The non core staff don’t have a union and only God knows how many of them are laid off and how many are still to go. The contract staff were sacked through SMS.”

Mr. Obasi argued the disengagement was not based on global best practice as claimed by the bank’s spokesperson, Babatunde Lasaki, while responding to questions from this newspaper.

Instead, he said the action was a witch-hunt because some staff who recorded less than 40 percent during the last performance evaluation were not sacked.

According to him, if the termination was performance-based, those affected should have been issued warning letters and performance probation letters and challenged the bank to provide evidence of the documentation it carried out before the sack.

Mr. Obasi said the disengagement process, which started in August 11, has not ended, saying core staff were being sent home every week, especially on Fridays after close of work.

Continuing, he said, “This is how big banks start crumbling when they don’t have regard for the staff who contributed to their success story.

“They forget we were once ambassadors of the bank and know the nitty-gritty and how they have exploited their staff in various payments like gratuities over the years.”

Before the August 11 “tsunami,” the staff through the Association of Senior Staff of Banks, Insurance and Financial Institutions (ASSBIFI), have been engaging the management on the need to fulfil its statutory and contractual obligations.

After series of meetings and appeals, the union on July 3, wrote to its members to explain what it has been doing to address their concerns.

In it, the union insisted management must promote its members in the course of the year among other demands.

Part of the letter which was obtained by this newspaper reads, “The unit leadership of your labour union hereby uses this opportunity to appreciate your loyalty, dedication, sacrifices and resolution to sail our common patrimony to the Promised Land.

“Though the work environment has been challenging and unrewarding, First Bankers have continued to weather the storm to make our bank a leading financial institution in Nigeria and indeed in all the markets we operate in.

“We, therefore, understand your negative reaction to the introduction of First Management Associate Programme (FMAP) by the bank’s management and the negative impact it will have on the career progression of the staff that laid the proverbial golden egg.

“As a responsible and responsive union, we wrote to reject the programme in its entirety. FMAP as a programme/policy is discriminatory and violates the principle of open, fair and equal opportunities to staff.

“Top performance should be the basis of career progression in the bank and not externalities that have no bearing on the bottom line.

“We daresay if the criteria for FMAP were to be applied to the present leadership of the bank at the time they were BA and manager grade, 99.99 percent of them would not have gotten to the position they are today.”

The union urged the bank to stop the FMAP policy, increase wages in line with economic reality and conclude the 2015 appraisal.

It also called for the release of 2016 promotion list, stop discrimination and bullying by superior staff, scrapping of new branch structure and payment of profit sharing in the same way hardship allowance is paid to management staff.

The union lamented in spite of several appeals and meetings, the bank’s management has remained defiant and unwilling to address the problems of staff.

It listed 13 issues it has discussed with the management but for which no action was taken and called on the members to remain resolute and prepare to support further measures at making the bank fulfil its obligations. 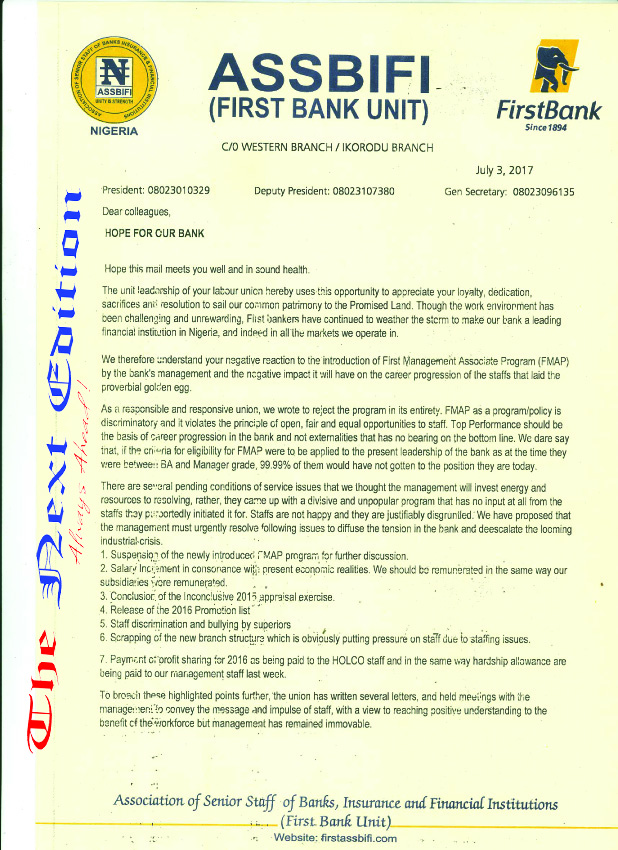 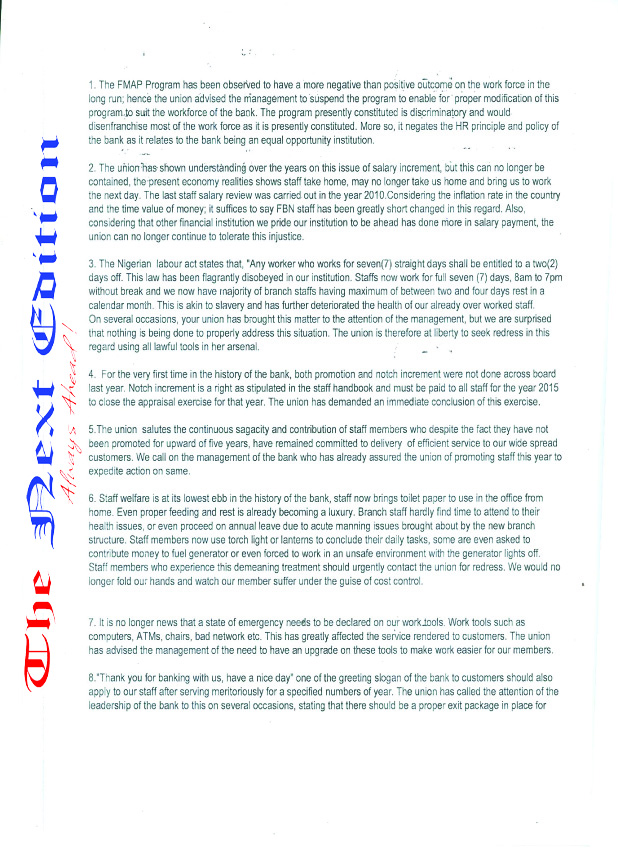 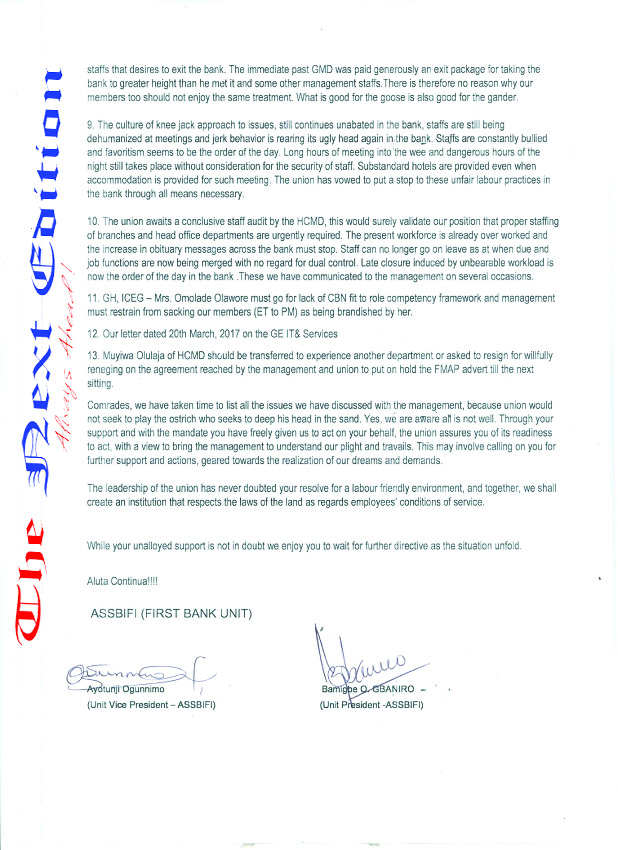 While the bank was yet to address the core issues raised by the union, some of the members who engaged the management got sacked including Mr. Ogunnimo, the ASSBIFI’s unit vice president.

One month after the 300 staff were disengaged, the bank has been struggling to extract an agreement from the union.

The NEXT EDITION learnt at the last meeting brokered by the national body of the ASSBIFI, the bank’s management agreed to pay 50 percent of the disengaged staff’s emolument as severance pay.

The move is contrary to an earlier claim by Mr. Lasaki, the bank’s spokesperson that the disengagement of the affected core staff was in line with global best practice.

A member of the team who pleaded not to be quoted because he is not authorised to speak on the matter said the affected staff have turned down the offer by the bank.

“As at the last meeting we had with the management of the bank, they had admitted they made a mistake by laying off the staff and expressed readiness to withdraw the termination of appointment letters,” he said.

“Instead, they are considering having the affected staff to voluntarily resign and negotiate their severance package.”

The representatives of the affected workers are said to have insisted on getting 135 percent of their annual pay as severance package besides being paid the statutory one-month in lieu or nothing.

However, the majority of the affected staff who have already formed a group to push for justice have vowed to challenge their sack before a court of competent jurisdiction.

When contacted on the telephone to speak on the claims made by the aggrieved former workers, the spokesperson for FBN, Babatunde Lasaki, said he was on vacation.

Asked to direct this newspaper to any official of the bank who could speak on the matter he responded, “Those people complaining to you can get to the office. If they have grievances. They should talk to the office. I don’t know why they are talking to you. I am on vacation and can’t talk about it.”

Not satisfied, we went to the FBN’s official website and attempted to send a mail to them through the media contact window but found the function inoperative. 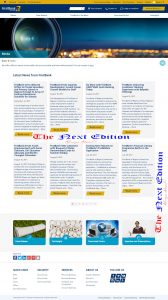