Home News Headline News Scientists come up with the diet to save lives, the planet and... 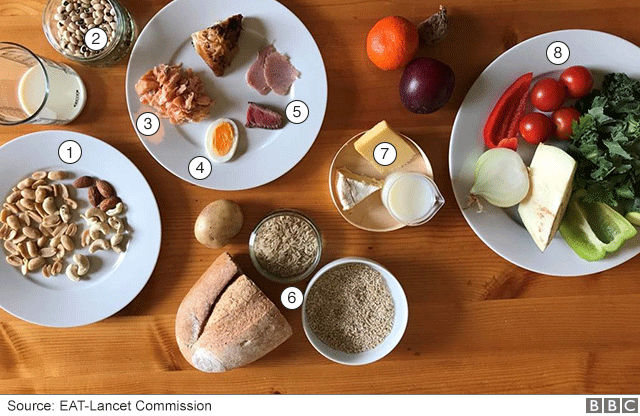 A diet has been developed that promises to save lives, feed 10 billion people and all without causing catastrophic damage to the planet.

Scientists have been trying to figure out how we are going to feed billions more people in the decades to come.

Their answer – “the planetary health diet” – does not completely banish meat and dairy.

But it requires an enormous shift in what we pile onto our plates and turning to foods that we barely eat.

The researchers are recommending nuts and a good helping of legumes (that’s beans, chickpeas and lentils) every day instead.

There’s also a major push on all fruit and veg, which should be make up half of every plate of food we eat.

Although there’s a cull on “starchy vegetables” such as the humble potato or cassava which is widely eaten in Africa.

On whether it will taste awful Prof Walter Willet, one of the researchers who is based at Harvard, said no.

He said: “There’s tremendous variety there.
“You can take those foods and put them together in thousands of different ways. We’re not talking about a deprivation diet here, it is healthy eating that is flexible and enjoyable.”

This plan requires changes to diets in pretty much every corner of the world.

Europe and North America need to cut back massively on red meat, East Asia needs to cut back on fish, Africa on starchy vegetables.

“Humanity has never attempted to change the food system at this scale and this speed,” says Line Gordon, an assistant professor at the Stockholm Resilience Centre.

“Whether it’s a fantasy or not, a fantasy doesn’t have to be bad… it’s time to dream of a good world,” she says.

Taxes on red meat are one of the many options the researchers say may be necessary to persuade people to switch diets.

A group of 37 scientists from around the world were brought together as part of the EAT-Lancet commission.

They’re a mix of experts from farming to climate change to nutrition and they took two years to come up with their findings which have been published in the Lancet.

The researchers say the diet will prevent around 11 million people dying each year.
That number is largely down to cutting diseases related to unhealthy diets such as heart attacks, strokes and some cancers.

These are now the biggest killers in developed countries.