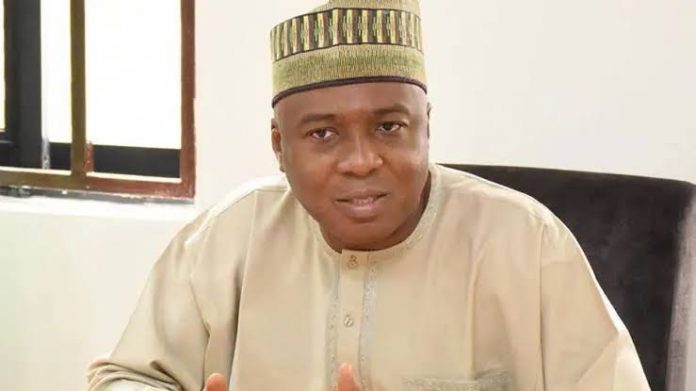 The Economic and Financial Crimes Commission (EFCC), on Wednesday, told a Federal High Court, Abuja, that the action of the former Senate President, Bukoka Saraki, has been hindering the agency from probing him.

EFCC Counsel, Chile Okoronkwo, made this known to Justice Anwuli Chikere when the fundamental rights enforcement suits filed by the immediate-past senate president were mentioned in the court.

The commission was reported to have seized some of his houses in the Ikoyi area of Lagos then.

The News Agency of Nigeria (NAN), however, reports that Saraki, on May 10, 2019, filed two separate suits marked: FHC/ABJ/CS/507/19 and FHC/ABJ/CS/508/19 respectively before Justice Taiwo Taiwo to challenge the action of the EFCC.

Justice Taiwo, who was the presiding judge, ruled on an ex parte application filed along with the substantive suits and ordered the anti-corruption agency (4th respondent) and the other five respondents to the suits to stay action on the probe pending the hearing and determination of the motion on notice filed by the applicant.

The order was granted after Sunday Onubi, Saraki’s lawyer, moved the application, on May 14, 2019.

Others in the two suits are the Attorney General of the Federation (AGF), Inspector-General of Police (IGP), State Security Service (SSS), Independent Corrupt Practices and Other Related Offences Commission (ICPC) and Code of Conduct Bureau (CCB) as 1st, 2nd, 3rd, 5th and 6th respondents respectively.

The court had directed the parties to maintain the status quo by suspending the probe.

“There is no doubt that in making the interim reliefs or orders, the court is guided even in its exercise of its discretion judicially and judiciously applied by the law and statues.

“I am of the view, after due consideration of the aforesaid, that this court ought to make the order being sought by the applicant pending the hearing and determination of the originating motion on notice,” Taiwo had ruled.

But the EFCC later applied that the judge should recuse himself and the matter be transfered to another court.

Justice Taiwo sent back the case file to the chief judge and the matter was reassigned to Justice Chikere for adjudication.

However, the EFCC’s Lawyer, Okoronkwo, informed the court that he had an application to make.

The lawyer briefed the court that on May 14, 2019, a sister court, presided over by Justice Taiwo, made an order “directing all respondents to stay off action in connection with the subject matter of the suit pending the hearing and determination of the substantive suit.”

He said though there was no doubt that the order was made by the court, “it has hindered the 4th respondent from performing its duty for about two years now.”

Okoronkwo, who stated that Saraki continued to hinge on the order of the court any time he is invited, urged the court to vacate the order.

Chikere, noting that the court vacation was around the corner, adjourned the matter until Oct. 7 for hearing.(NAN)