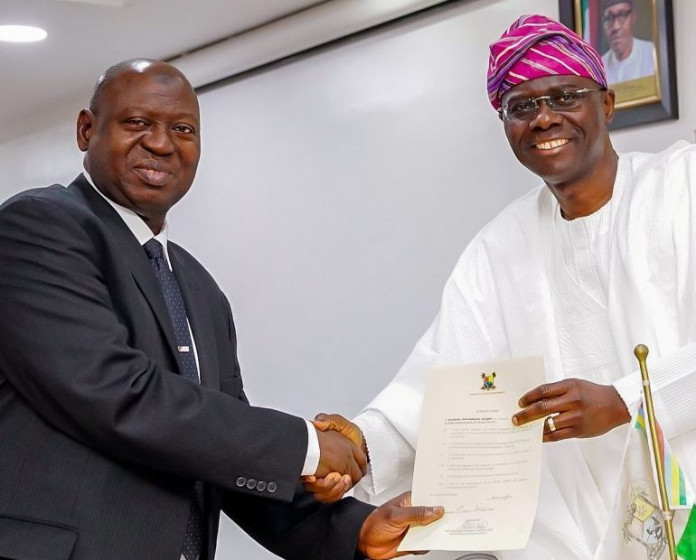 Lagos State Governor, Babajide Sanwo-Olu, has said the executive will work with the state’s judiciary and the Federal Government to find a lasting solution to prison congestion.

The Governor observed that the issue has become a major challenge to the state’s justice system.

Sanwo-Olu stated this on Thursday during the swearing in of Justice Kazeem Alogba, the new Acting Chief Judge of Lagos State.

According to the Governor, “The current situation where over 70 percent of inmates in our prisons constitute awaiting trials is not acceptable as it is not a reflection of an efficient justice delivery system. We will also not hesitate to do whatever is required to sustain the on-going reform in the judicial sector so the desired result of ensuring that the wheel of justice rolls as fast as it could, will be achieved.”

The governor further stated that his administration would embark on the review of the state’s judiciary, noting that the three arms of government must form a synergy for the development of the state.

Sanwo-Olu also promised to continue with judicial reforms in the state.

“We are all partners in progress. We must continue to work together to deliver the good for the teeming Lagos populace. This is what governance is all about,” Sanwo-Olu said.

While congratulating the new acting Chief Judge, Sanwo-Olu expressed confidence in his capacity to continue on the path of progress that had been created in the state judiciary since the beginning of the Fourth Republic.

“I have absolute confidence in your ability and capacity to sustain and improve on the enviable reputation which the Lagos State Judiciary has built for itself over the years, particularly since 1999 under the administration of Asiwaju Bola Ahmed Tinubu.

“During the tenure of that administration, a solid foundation was laid through the introduction and implementation of critical reforms and initiatives that are aimed at building a judicial system that is efficient, reliable and courageous to uphold the fundamental principles and ideals of equity, fairness, natural justice and the rule of law.”

Justice Alogba, in his vote of assurance, thanked the governor for the honour, promised to exercise the powers of his office conscientiously for the good of the common man and the furtherance of the administration of justice in Lagos State.

He suggested that traffic and environmental offenders should henceforth serve their sentences at the point where the offences were committed.

He said no one likes to wear a toga of an ex-convict so community service or some other forms of punishment should be handed to offenders at the point of contravention.

Justice Alogba also promised speedy and effective dispensation of justice, zero tolerance for corruption and corrupt tendencies, rigorous, adequate and continuous training of judicial staff as well as improvement on the use of Information Communication Technology, ICT, for the delivery of justice.

“We will pursue the use of Information Communication Technology and dwell on staff welfare. We pledge our support for the new administration,” Alogba said.