Home News Top News #RevolutionNow Not A Protest, It Is A Child’s Play – Adesina

The Presidency has described the protests by members of the #RevolutionNow movement in parts of the country as a child’s play.

Speaking during his appearance on Channels Television Breakfast programme, Sunrise Daily on Thursday, the President’s Special Adviser, Femi Adesina, dismissed the demonstration by the protesters.

“Well, was it really a protest? By my estimation, that just seemed like a child’s play because protests by their very nature are spontaneous things; they are mass things,” he said. 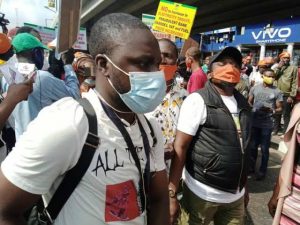 The President’s spokesman added, “I just saw a sprinkle of people trying to be funny. As far as I am concerned, it is nothing to worry about because when you talk of a revolution, a revolution is always a mass thing.

“Not the sprinkle of young boys and girls you saw yesterday in different parts of the country. I think it was just a funny thing to call it a protest and a revolution protest.”

Dozens of youths had taken to strategic areas in Abuja and Lagos, among other parts of the country in protest to demand the resignation of the present administration.

Among the various issues raised, the protesters said the government has failed to tackle the security challenges in the country and provide jobs for unemployed youths.

In his reaction, Adesina insisted that there was never a revolution march and the action of the youths was a mere child’s play.

According to him, revolutions, by their nature, are quite well-known and the government has been living up to its responsibilities.

The President’s spokesman said, “Revolution is something that turns the normal order; what happened yesterday, would you call it a revolution? It was just an irritation and some people want to cause irritation in the country.

“And what I will say is that when things boil over, they boil over because you continue to heat them. So, Nigerians need to know that the country we get is what we used our own hands to build.”