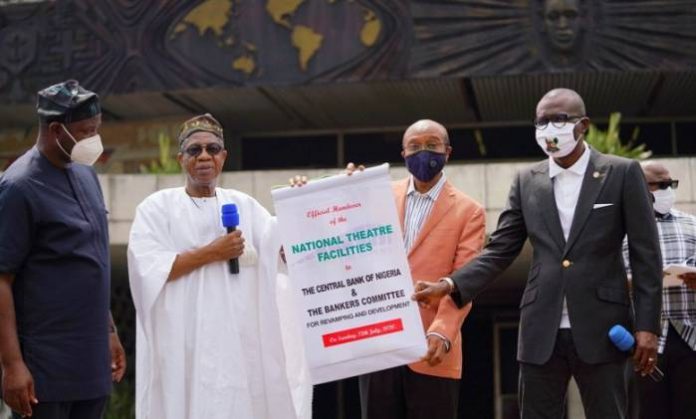 Minister for Culture and Information, Alhaji Lai Mohammed, Sunday in Lagos handed over the National Theatre to the Central Bank of Nigeria (CBN) and the Bankers committee for restoration and upgrade.

Speaking at the event, Mohammed said that the National Theare, despite the arrangement, still remained a national heritage.

According to him, the Federal Ministry of Information and Culture would continue to hold the keys to the iconic national heritage inspite of the Public Private Partnership arrangement between federal government and the Bankers Committee.

“He said, permit me to make clarifications that this iconic National theatre remains a national heritage and will not be ceded to any person or group as some naysayers are insinuating, it remains our national heritage.

“The Federal Ministry of Information and Culture will continue to hold the keys to the National Theatre on behalf of all Nigerians. What we are here to do is to handover the National Theatre for restoration and upgrade and also the 134 hectares of fallow land within the premises to the CBN and the Bankers committee for development,” he said.

Speaking further, the Minister said that the PPP arrangement would be in two phases which were; the restoration and upgrade of the National Theatre to its glory days, while the second phase would be the development of the fallow land surrounding the edifice.

“Another good news is that this project will not lead to any single job loss rather, it will create more, over 6,000 jobs will be created during the construction phase while the completed project could generate additional 600 permanent jobs and 2,000 to 3,000 jobs, this is a good one,” he added.

Mohammed said that the project which had been approved by President Muhammadu Buhari would be a win-win arrangement for everyone involved.

”The place had been left for over four decades without any form of renovation.

”Government has no money to restore the complex as you know, this is the hub of the creative industry in Nigeria. The National Theatre was established for the advancement of the performing arts throughout the country, to also encourage the promotion of the social development and improvement of the quality of life.

The Minister said that the centre, upon upgrade, would comprise creative clusters of fashion, music, film and information technology which would be supported by other facilities including multi-storey parking space to accommodate over 1,000 cars.

”There would be the administrative and management offices, this will create massive job opportunities for the youths. I enjoin all of us to give our maximum support to this project so that we can bequeath a befitting national heritage to the younger generation. I appreciate everyone connected to the success of this project,” he said.

Also, the Minister for Youths and Sports, Mr. Sunday Dare, said that it was a privilege for him to be at the event which would see to revampimg the creative and entertainment centre.

Dare said many would wonder why the Minister for Youths was at the event forgetting that the youth would benefit more from the project as they are the most active part of the creative industry.

“The potential of the new National Theatre is massive job creation, talent discovery for our youths and the coming generation being an information and technology hub. With the pandemic still biting hard, this project is much more divine and needed to battle the multi-headed challenge of unemployment, criminality and the negative impression that is thrust upon individuals who have chosen the life of crime,” the minister noted.