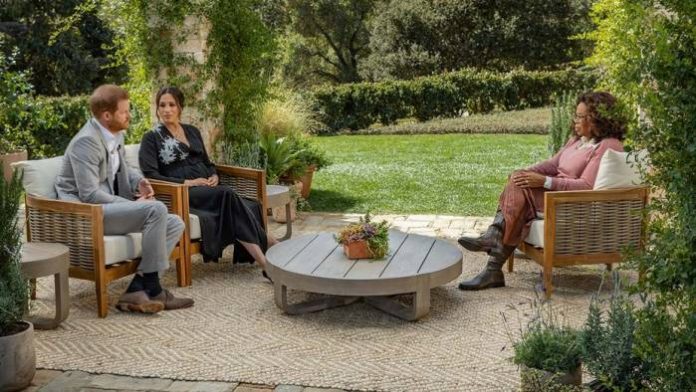 Oprah Winfrey has said conversations about the skin colour of Prince Harry and Meghan’s son Archie were not heard by Queen Elizabeth II and her husband Prince Philip.

The conversation was in new clips released of her bombshell interview with the couple on Monday.

In the original interview, which aired on Sunday, the duke and duchess of Sussex made a series of allegations against the royal family.

Meghan told the U.S. television icon that there were concerns and several conversations with Prince Harry about ‘’how dark Archie’s skin might be when he was born.’’

The biracial actress declined to say who it was that had the conversations with husband about Archie’s skin colour as it would be very damaging to them.

She added that she suffered with her mental health during her time as a senior royal, stating she didn’t want to be alive anymore and claimed she sought help from a senior member of the royal family but never received it.

Charles Anson, who worked as the queen’s press secretary from 1990 to 1997, told the BBC he believed there wasn’t a strand of racism within the royal household at all, but added the couple’s comments needed to be considered.

In response to Meghan’s comments about her mental health, Anson said that there was a medical household within the palace structure which he remembered being very responsive to members of staff and members of the royal family.

Britain’s Labour party, the opposition to the government, meanwhile is calling for an investigation into Meghan’s claims.

Shadow Education Secretary, Kate Green, said the allegations of racism were distressing, shocking and urged Buckingham Palace to treat them with the utmost seriousness and said they should be fully investigated.

In Oprah’s follow-up with CBS ‘This Morning’ on Monday, she revealed Prince Harry had told her it was not his grandmother nor his grandfather that were part of those conversations about Archie’s skin colour.

In other new clips released, Harry said a large part of the reason he and Meghan left England for a life in the United States was due to the racism in Britain.

He also claimed no one from the royal family had apologised to him and Meghan when they revealed they needed to leave the family due to a lack of support they felt they were having.

Buckingham Palace has yet to release a statement or comment on the interview.

A spokesperson for Prime Minister Boris Johnson has declined to comment on Meghan’s allegations of racism towards her son, Archie, by a member of the royal household, adding that Johnson had not watched the interview.

Oprah’s interview, which aired on U.S. television network CBS on Sunday, is scheduled to be shown in full in Britain later on Monday. (dpa/NAN)