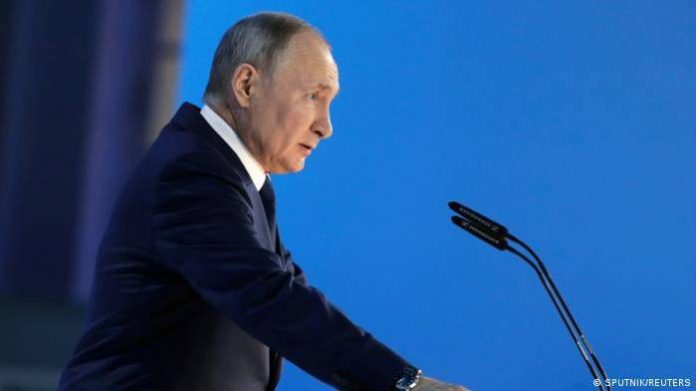 Putin, who spoke at length about the country’s foreign policy in his annual address to the nation, warned Western powers against crossing a “red line’.”

In front of hundreds of representatives from the spheres of politics, the economy and culture, Putin charged that lashing out against Moscow had become an all-too-common habit in recent times.

“Some countries have developed a very bad habit of taking digs at Russia whenever a chance offers itself, and most often without any reason at all.

“It looks like a new sports game who will manage to say something louder than the others,’’ he said, as quoted by Russian news agency TASS,” he said.

According to him, organisers of any provocations that threaten the core interests of our security will regret their actions like they have regretted nothing for a long time.

“But I hope that it will not occur to anyone to cross the so-called red line with Russia. Where it runs, we will decide for ourselves in each specific case.

“We do not want to burn any bridges, but if someone perceives our good intentions as indifference or weakness and intends to blow up these bridges, then they must know that Russia’s response will be asymmetric, swift and harsh,’’ he said.

Moscow’s already frayed ties with the West have come under further strain with the jailing of Russian opposition leader Alexei Navalny as well as escalating military tensions in eastern Ukraine.

The U.S. and EU have hit Moscow with a raft of sanctions, with Washington also accusing the Kremlin of being behind a massive cyberattack that affected several U.S. agencies.

The U.S., Poland, Bulgaria and the Czech Republic have all recently expelled Russian diplomats, for differing reasons, resulting in reciprocal punitive action by Moscow. (dpa/NAN)