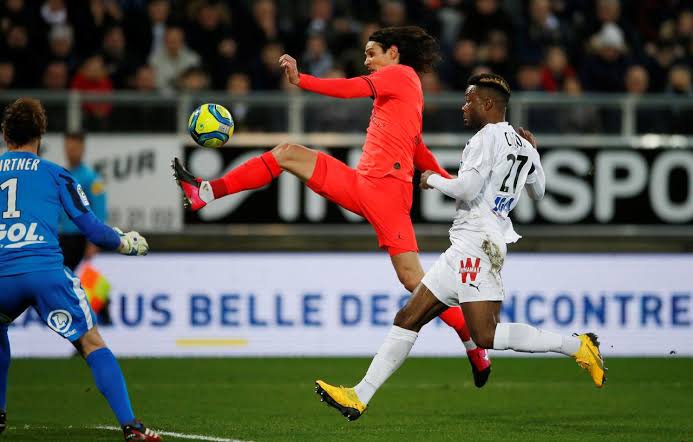 A second-string side by Paris St-Germain (PSG) were held to a 4-4 draw at struggling Amiens in Ligue 1 on Saturday.
After erasing a three-goal deficit, they then went on to concede a stoppage time-equaliser.
The result left PSG 13 points clear of second-placed Olympique de Marseille after manager Thomas Tuchel rested several regular starters.
This was done ahead of Tuesday’s first leg tie of their UEFA Champions League last-16 clash with Borussia Dortmund.
The makeshift line-up, with midfielder Ander Herrera playing in an unfamiliar right-back role, looked all at sea in the opening half.
This was after goals from Serhou Guirassy, Gael Kakuta and Fousseni Diabate gave 19th-placed Amiens a 3-0 lead.
Guirassy fired Amiens ahead with a crisp fifth minute finish and Kakuta made it 2-0 with a rasping shot from 18 metres which gave visiting goalkeeper Keylor Navas no chance.
A huge shock seemed on the cards as Diabate capped a jinking run through the middle with a low shot which went in off the post.
But Herrera pulled one back for the French champions on the stroke of half-time when he steered in a Julian Draxler corner kick.
The Spaniard’s goal helped turn the match as a pair of headers from centre-back Tanguy Kouassi levelled the scores inside the opening 20 minutes of the second half.
Amiens had again been undone by set-pieces as Draxler swung in another corner-kick for Kouassi to rise above his marker and head it into the net.
Five minutes later, the defender met Angel Di Maria’s cross at the far post to silence the home fans.
READ ALSO: Sarabia On Fire As PSG Recruits Shine In Victory Over Angers
With Amiens on the back foot, it was no surprise that PSG grabbed a 4-3 lead in the 74th minute.
Mauro Icardi popped up at the far post and tapped in a fine low cross by Juan Bernat.
But the visitors then missed several gilt-edged chances with Edinson Cavani, who was looking for his 200th goal for PSG in all competitions, particularly guilty of poor finishing.
His astonishing miss in the dying minutes was punished moments later at the other end.
Guirassy levelled with a fine finish from inside the penalty area after he was put through by substitute Quentin Cornette.
In the evening’s most entertaining fixture, ninth-placed Girondins Bordeaux missed a chance to move into the top six as they were held to a 2-2 home draw by Dijon.
The visitors dropped one place to 18th.
Mounir Chouiar fired Dijon ahead early on when he capped a fast break and then salvaged a point for the visitors in the closing stages with a delightful shot.
That was after Bordeaux’s Hwaing Ui-Jo and Jimmy Briand had cancelled out his opener.
Bottom team Toulouse are staring at relegation after a 2-0 home defeat by Nice, who are eighth, left them 14 points adrift of the safety zone.
Nimes beat visiting Angers 1-0 to climb out of the bottom three.
Marseille visit fourth-placed Lille and Stade Reims are at home to Rennes, who are third, in Sunday’s stand-out fixtures.
Reuters/NAN