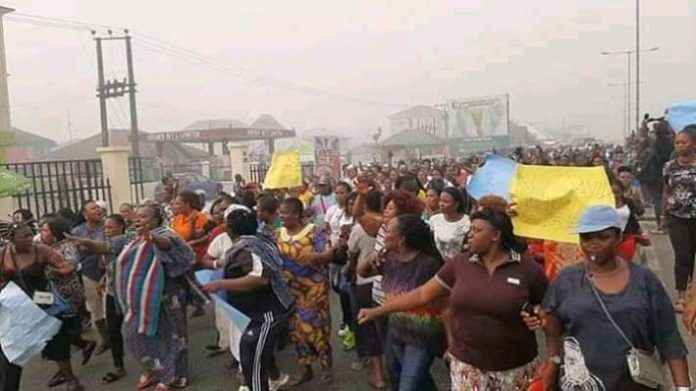 Protesters stormed the secretariat of the Peoples Democratic Party (PDP) in Yenagoa, Bayelsa State, setting part of the building ablaze.

Reports said that aggrieved residents, protesting the Supreme Court judgement, threw bonfires at the premises of the PDP secretariat setting fire on the generator and security houses.

The protesters also took out their anger on the judiciary complex as they attempted to burn part of the building.

According to reports, the quick intervention of the state fire service prevented the raging fire at the PDP secretariat and the judiciary complex.

They were said to have vandalised some equipment and torched vehicles parked at the premises.

Their presence created panic, forcing employees to flee their offices for fear of being killed.

The situation at the East-West Road especially the Kaiama axis in Kolokuma-Opokuma Local Government Area was reportedly terrible, according to The Nation.

The protesters were said to have taken over the expressway, stopped vehicular movement and kept travellers stranded.

They set bonfires on the major roads as they insisted that Lyon must be sworn in as the governor of the state.

Recall that the Supreme Court had on Thursday sacked David Lyon as governor-elect of Bayelsa State.

The apex court therefore ordered that the candidate of the party with the next highest votes and with the required constitutional spread be declared winner and be issued with the Certificate of Return.