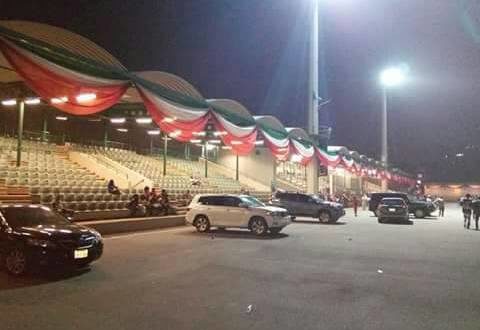 Kwankwaso Campaign Organisation has accused the Federal Government of being behind the refusal to use the Eagle Square for the declaration of presidential ambition of its principal, Senator Rabiu Musa Kwankwaso.

The group made the accusation on Tuesday in a statement it issued announcing that Kwankwaso had been denied of the use of the facility.

The group said although it had applied for the facility about a week earlier, the manager of the facility communicated the denial barely 24 hours to the programme.

The campaign group blamed the denial of the facility on the government, accusing it of not wanting the nation’s democracy to grow.

The declaration is billed to hold on Wednesday.

The statement read: “Kwankwaso Declaration: FG Turns Down Request to Use Eagle Square Just 24 hours to the highly publicized presidential declaration of Senator Rabiu Musa Kwankwaso due to hold at the Eagle Square on Wednesday, the 29th August, 2018, the Federal Capital Territory Administration(FCTA) has turned down the request earlier approved for some flimsy reasons.

“In a letter dated August 27th, 2018 and signed by Usman Mukhtar Raji for the Facility Manager and received on August 28th, 2018 barely 24 hours to the scheduled declaration, the Abuja International Conference and Eagle Square, managed by the Integrated Facility Management Services Ltd has reversed itself in respect of approval granted the organizers of the declaration of Senator Kwankwaso.

“We at the Kwankwaso Campaign Organisation see the development as a handiwork of the government in power who will not see anything good in growing our fledgling democracy as no level playing field has been created to allow for viable opposition in the country.

“Even at that, earlier Tuesday morning the Abuja International Conference and Eagle Square, managed by the Integrated Facility Management Services Ltd refused us access to inspect the premises demanding us to present a police permit, when actual approval for the use of the Eagle Square has been sought and paid for more than one week to the said declaration.

“The above development will in no way dampen our morale to go ahead with the declaration or chicken-out as it will only embolden us to legally pursue our fundamental right to freedom of movement and association.”