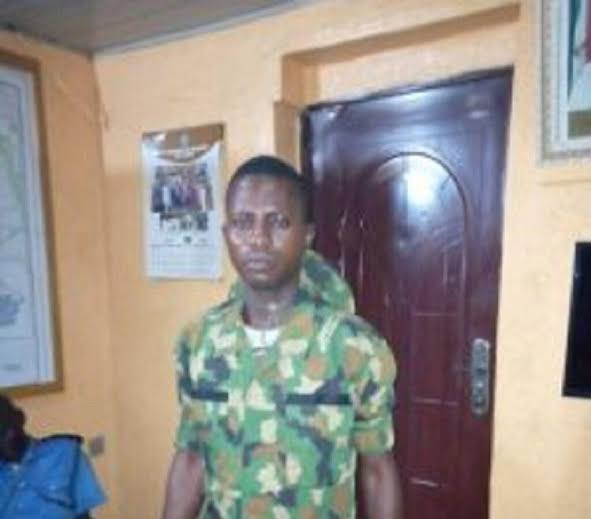 Police in Ogun State said on Sunday that they have arrested an ex-convict, Segun Ogundeji, who impersonated as a soldier at Sango-Ota Police Divisional Headquarters in Ogun.

Police spokesman in Ogun, DSP Abimbola Oyeyemi, made the declaration in a statement issued in Ota.

Oyeyemi stated that Ogundeji was arrested when he went to Sango-Ota Divisional Headquarters, fully dressed in army camouflage to solicit for the release of a suspect.

“On getting to the station, Ogundeji met an Air Force man, one Cpl. John Temitope, who accused him of failure to give him official compliment, as a result of which a quarrel ensued between them.

“It was the quarrel that led the Divisional Police Officer (DPO), Sango-Ota, CSP Godwin Idehai, to interrogate them. It was during the interrogation that the police discovered that Ogundeji is not a military man.

“It was also discovered that a court once convicted Ogundeji for impersonation,’’ he stated.

Commissioner of Police, CP Edward Ajogun, has ordered a full investigation into the past activities of Ogundeji. (NAN)