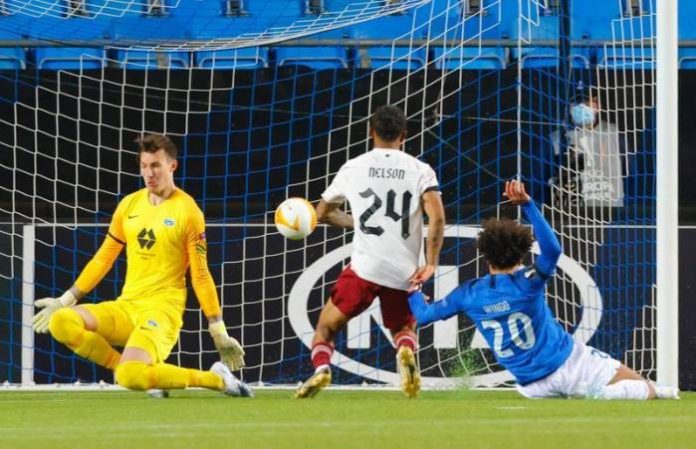 Arsenal qualified for the knockout stages of the Europa League after beating Molde 3-0 with Nicolas Pepe redeeming himself after his Elland Road red card.

Pepe, whose headbutt on Ezgjan Alioski on Sunday was called “unacceptable” by his manager Mikel Arteta, was given an immediate chance to make up for his misdemeanour by starting in Norway and opened the scoring with a fine curling effort.

Reiss Nelson was on hand to hammer home from close range before substitute 19-year-old Folarin Balogun netted his first goal from the club having been on the pitch for just 37 seconds.

The 3-0 victory maintained their 100 per cent start to Group B.

Arsenal started with plenty of tempo and adventure with at times the wide men making it a front four.

They dominated the early territorial battle but it was the hosts that created the most dangerous opening when Magnus Eikrem half-volleyed a quite brilliant ball across the face of goal for centre-back Sheriff Sinyan at the far post but he side-footed it back across goal and Alex Runarsson made a save.

The Gunners won six corners in the first half but didn’t make the most of their territory as Andreas Linde was largely untested in the Molde goal. Pepe moved well off the right-wing on 21 minutes but blazed an effort wide before Nelson did the same from the other wing on 40 minutes.

Arsenal needed to be quicker in transitions after the break and came out with a renewed vigour. Pepe cut in from the left in typical fashion on 48 minutes but his fantastic strike from 25 yards came crashing back off the underside of the crossbar. He wouldn’t have to wait long for his moment of redemption though. Just two minutes later he found space in the box and confidently curled a finish into the corner.

That opened the floodgates for Arsenal in the final third. Eddie Nketiah had a goal chalked off for a marginal offside on 52 minutes before Nelson did double the lead moments later. Joe Willock provided the width down the right and his cross was thumped home from close range by Nelson.

Nketiah really should have got his name on the scoresheet but he somehow managed to divert a header from six yards out over the crossbar following another brilliant delivery from the right, this time from Pepe.

With Arsenal easing to victory, Arteta handed some first-team minutes to youngsters Emile Smith Rowe and Balogun, who is highly rated by the manager but is also out of contract at the end of the season.

The pair showed their potential by linking up to brilliant effect to make it 3-0. Smith Rowe ghosted into the box down the left and found the striker, who turned quickly before firing a low effort home. It was just 37 seconds between Balogun entering the field and finding the net.