Home Politics Over 15,000 Quit PDP, Others To Join YPP In Akwa Ibom 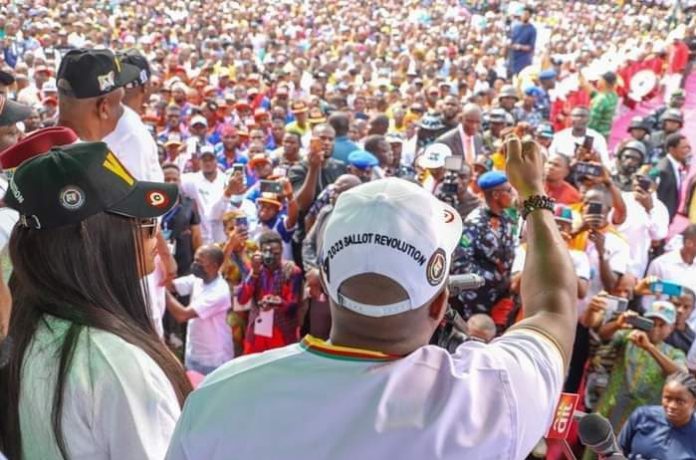 No fewer than 15,000 members including National, State Assembly Lawmakers, Chapter, Ward chairmen and major stakeholders of the ruling People’s Democratic Party (PDP) and other parties in Akwa Ibom State, at the weekend, declared officially for the Young Progressives Party (YPP), ahead of 2023 general elections.

They rescinded their membership of the PDP and were joined by Senatorial hopeful and former House of Representatives member for Abak Etim Ekpo, Ika Federal Constituency, Rt Hon Emmanuel Ekon; former Commissioner in the state, Hon Samuel Efanga; immediate past Chief of Staff to Governor Udom Emmanuel, Akparawa Ephraim Inyang-Eyen and other defectors, to be presented during the party’s official reception of 2023 governorship frontrunner, Senator Bassey Albert Akpan.

At the event held at Senator OBA Multi Purpose Event Center, Ifa Ikot Akpan in Uyo, the bigwig decampees joined the party alongside about 15,000 members of PDP and the major opposition in the state, the All Progressives Congress APC.

They all pledged their allegiance to the YPP, promising to work assiduously to ensure that the party which is new in the state emerges victorious in 2023.

Receiving the defectors, the YPP National Chairman, Comrade Bishop Emmanuel Amakiri, urged them to feel at home in the party, assuring that it is a wonderful family that cares for the interest of all and sundry.

He assured them that YPP has come to stay in Akwa Ibom state.

According to him, “time has come for every young progressive-minded Nigerian to take his destiny in his hands and it is heartwarming to see that the masses have decided to rally round their popular son, OBA, to liberate Akwa Ibom from its current quagmire.”

He, however, described OBA as the best person that can take Akwa Ibom to its desired destination and urged the people to resist vote selling because it is what brought Nigeria to its present misfortune.

In his speech at the event, the state chairman of the party, Apostle Nyeneime Andy, who was also the gubernatorial candidate of the party announced his withdrawal from the 2023 Governoship race, to give room for Senator Bassey Albert Akpan in the contest.

Addressing the crowd that thronged the OBA mini sports centre, Akpan, who is the senator representing Akwa Ibom North East (Uyo) Senatorial District, said that in line with INEC Electoral Act 2022, Section 33, he willingly offered himself as an aspirant in the upcoming primaries of the party for substitution, following Andy’s withdrawal of his candidacy.

He assured the delegates that if given the chance at the primary, he will not disappoint the party, adding that as a governor, all the civil servants will be treated to social justice and welfare.

He also assured the people of Eket, Uyo and Ikot Ekpene Senatorial Districts of fairness and equity in the next dispensation.

The senator announced plans to work with others on the theme of “3Rs”, promising to “Recover Akwa Ibom, Reconcile Akwa Ibom back to God and Reposition Akwa Ibom for greatness.”

He gave the hope that hope is by the corner, he said the next government will banish hunger, insecurity, hardship and injustice from the state.

OBA decried a situation where the current government has refused to pay imprests to deserving civil servants for over 18 months and owes over N18 billion in pensions and gratuity to retired workers.

Expressing optimism that YPP will defeat PDP in all the units, OBA promised to clear gratuities and pensions, as well as arrears of promotions is given the opportunity to lead the state.

The event was preceded by the official unveiling of the state YPP secretariat and OBA’s campaign office both on Four Lanes, Uyo. (The Will)