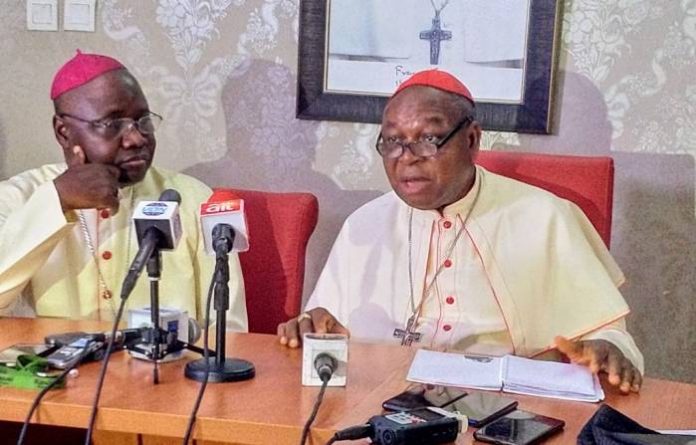 John Cardinal Onaiyekan has formally bowed out as the Catholic Archbishop of Abuja.

He has also handed over to his successor, Ignatius Kaigama.

Onaiyekan, who handed over at a press conference in Abuja, on Tuesday, said that Kaigama would be formally inaugurated on Thursday in Abuja.

He said though he was retiring as Catholic Archbishop of Abuja, he would not retire from speaking against all forms of oppression in the country, until social justice was achieved for all citizens.

He called on political leaders to make social justice and equity a priority if Nigeria must progress.

Speaking about his successor, Onaiyekan said: “I am confident in the abilities of my successor to lead the Archdiocese to the next level of development.

“There were no elections to determine who will succeed me. There were no campaigning and lobbying. His (Kaigama) appointment was simply in line with the Church practice.”

In his own remarks, the new Archbishop of Abuja province, Most Rev Ignatius Kaigama, acknowledged that a lot of things had gone wrong in the country, but assured he would wage serious war against the social ills and vices militating against the development of the country.

He said: “We are the hope of Nigeria. So many things have gone wrong, but we cannot just sit and say prayers.

“We have to go beyond prayers, because faith and action go together. We have to mobilise our people to be integrated and work genuinely for the progress of Nigeria and the happiness of our people.

“I am not going to be hunting for problems, but when they come, I will do my best to tackle them with my priestly character and identity.

“I will not be idle. I will always be doing something for Church and country, attacking ills, social vices, and anything that will not be helpful to the development of Nigeria.”

Kaigama lamented that despite the current administration’s promise to tackle graft among public office holders, the menace had failed to give way for probity and accountability, adding “If there wasn’t corruption, there would have been an equitable distribution of resources and our people will be living well above the poverty line.”