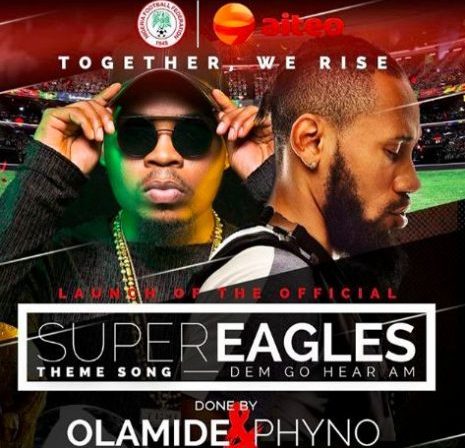 Nigerian indigenous rappers, Olamide and Phyno, have released a World Cup theme tune to support the Super Eagles at the finals of the 2018 FIFA World Cup in Russia.

The song, tittled “Dem Go Hear Am” produced by Pheelz, is powered by Aiteo, a main sponsor of the Super Eagles for the 2018 FIFA World Cup.

Aiteo, founded in February 2008, is an integrated, global-focused Nigerian Energy conglomerate that partnered with the Nigerian Football Federation, to give quality treatment and support to the players and technical crew of the Super Eagles throughout their World Cup campaign.

The official theme song will be launched at an event in Lagos featuring a host of Nigerian Performers, including Phyno, Olamide, Small Doctor, Ay and Bovi.

The lyrics of the song paid tribute to some ex-Super Eagles players like Sunday Oliseh, Rashidi Yekini and Samuel Okwaraji.

Similarly, leading up to the previous World Cup, Nigeria’s National Telecom Operator and Major Sponsor of the Super Eagles, Globacom, assembled its music ambassadors including MI, Flavour, Wande Coal and Omawumi to produce three theme songs aimed at firing up support for the team’s success in the 2014 World Cup.

Recently, the Official World Cup song, titled “Live It Up” by Will Smith, was released on different Music streaming platforms.

The official song will be performed during the opening ceremony of the competition on June 14. (NAN)