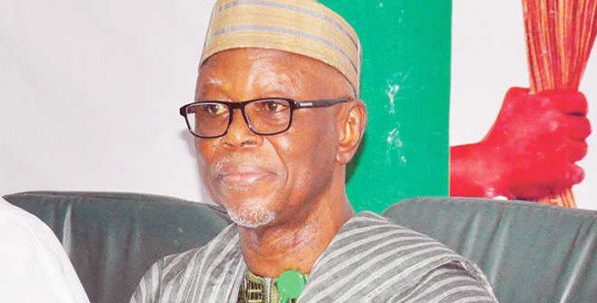 Gov. Godwin Obaseki of Edo, one of his predecessors, Mr. Lucky Igbinedion and Gov. Oluwarotimi Akeredolu of Ondo State were among the dignitaries who attended the 80th birthday mass in honour of Mr. John Oyegun.

Other dignitaries at the mass included the Esama of Benin, Gabriel Igbinedion; the wife of the Edo Governor, Mrs. Betsy Obaseki, Deputy Governor of Edo, Mr. Philip Shaibu and the state Chief Judge, Justice Esohe Ikponmwen.

Archbishop Augustine Akubeze of the Catholic Archdiocese of Benin presided over the mass attended by Bishops Gabriel Dunia of Auchi and Donatus Ogun of Uromi, several priests as well as church and state dignitaries.

Akubeze in his homily described Oyegun, the immediate past National Chairman of the All Progressives Congress , APC, as a humble, patriotic and fine politician who devoted his life to the development of the country.

“Our political leaders should know that those who want peace must work for justice for all Nigerians, knowing that justice brings peace and development,” he said.

The cleric urged leaders in the country to work for justice in order to get peace which, he said, was the only means of achieving developments.

The archbishop also commended the developmental stride of the Gov. Obaseki-led administration, which he said, were so feasible in all the three senatorial districts of the state.

“In you, we have seen a technocrat who doesn’t believe in wasting state resources but rather believes in using the finances to work for the good of the people,” he said.

Akubeze also commended the state government for applying the rule of law to seek justice for the crisis in the state House of Assembly, urging Obaseki and the APC National Chairman, Adams Oshiomhole, to work together to build a stronger Edo.

While condemning the current state of insecurity in the country, the cleric called on all the stakeholders to join hands together to tackle the challenges.

In his remarks, Obaseki disclosed that his administration had decided to name the Public Service Institute under construction after Oyegun, who is also a onetime governor of the state.

He added that there were no fundamental issues between him and his predecessor in office, Mr. Oshiomhole, assuring the citizens of the state that things would soon return to normal between them.