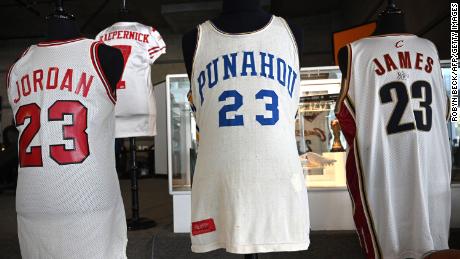 The jerseys, along with another from NBA Los Angeles Lakers star LeBron James, were feature attractions in a four-day auction that ended Friday.

That set a record sale price for any jersey worn by the five-time NBA Most Valuable Player and 14-time NBA All-Star playmaker.

The white jersey was the one Jordan lifted at his first news conference as a member of the Bulls as the club announced signing their top NBA Draft selection.

The previous record payout for a Jordan jersey was last July 18 for $288,000 for one worn in the 1998 Eastern Conference finals against Indiana.

Obama’s number 23 white jersey, worn by the future president during his senior year at Punahou School as a member of the 1979 Hawaii state champion squad sold for $192,000, a record price for any high school jersey.

It broke the old prep sales mark of $187,500 from October 2019 for a James high school jersey and came with a copy of the 1979 school yearbook showing Obama playing in the jersey.

Kaepernick’s rookie jersey for the San Francisco 49ers, a white number 7 shirt signed by the controversial quarterback, was used in his NFL debut on October 2, 2011.

Kaepernick’s kneeling protests during the US anthem before NFL games gained national attention when US President Donald Trump called for kneeling players to be fired. Kaepernick went unhired as a free agent after opting out of his 49ers contract and has not played since while becoming a symbol for Black social injustice protests.

Worn, signed and gifted by James, the jersey bears the earliest-known James autograph on a game-worn jersey.