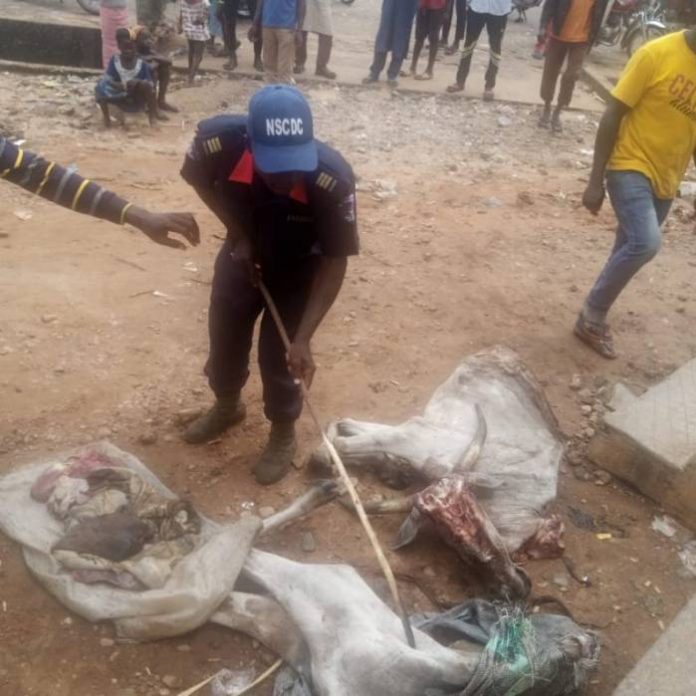 The Kwara Command of the Nigeria Security and Civil Defence Corps (NSCDC) has arrested a meat seller, Bashiru Bala-Zuru, and one Nawali Bala while attempting to sell contaminated and unhealthy cow meat to the public for consumption.

This was contained in a statement signed by the Command’s spokesman, Mr. Babawale Afolabi, and made available to journalists on Sunday in Ilorin.

Afolabi said that the two suspects were arrested in Patigi, Edu Local Government Area of Kwara.

“Around 8 p.m., on Sep. 18, NSCDC officers at Patigi Divisional Headquarters, acted on information received and arrested Nawali Bala, a native of Okoloke, Kogi, with some contaminated cow meat.

“The unhealthy meat was packed inside an empty sack,” he said.

The spokesman said that during interrogation, Bala confessed that the meat was given to him by one Dantani Jayewu of Okoloke, Kogi , now at large.

He said that investigation conducted at Ministry of Environment and Public Health confirmed that the meat was unhealthy for human consumption.

Afolabi said that the suspects would be charged to court after the completion of investigations. (NAN)