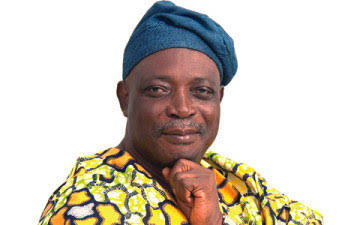 Former Gov. Rashidi Ladoja of Oyo State says there is nothing wrong with the choice of the Muslim-Muslim ticket, if it will bring the desired growth and development to Nigeria.

Ladoja made the assertions while speaking with newsmen on Saturday in his Bodija residence in Ibadan.

The former governor said that the sentiment of Muslim-Muslim ticket should not be a criteria for electing leaders.

“I don’t see anything wrong in Muslim-Muslim ticket, because I don’t intervene in the religion matters. Muslims and Christians are from the same father, Abraham is known as Ibrahim in Islam.

“Even, I don’t have time to fight with the traditionalists. It is only God that knows his servants; so, why must we fight over religion,” he said.

The former governor said that all religions, including traditional religion, preach love and good characters.

Ladoja said that if not for the crisis and killings in some parts of the country, they usually don’t think about the kind of religion anyone was practicing.

According to him, it is only politicians that usually cause crisis with religion. They are the causes of all these things, but God will intervene.

“But, when gunmen started attacking churches and kidnapping clerics in Christendom, people started doubting their fellow brothers who belongs to another religion,” former governor said.

He said there were many factors involved in electing a president, adding that it also required more prayers.

The former governor said that his prayers, including that of other Nigerians, was not a repeat of what happened to the late Chief M.K.O Abiola in 1993.

“There are many factors involved in electing the President. Whoever wants to be president and those working for him, have to work very hard.

“In fact, they will need more prayers as they are consulting. With all these efforts, God has the final say on who becomes the president.

“Chief M.K.O Abiola, a Muslim was elected along his Muslim vice, Alhaji Babagana Kingibe. We only pray that if Tinubu wins, it won’t turn into same scenario of late Abiola,” he said.

Ladoja decried the recent attack on the advance party of President Muhammadu Buhari in Katsina and Kuje Correctional Centre in Abuja.

He said that government need to strengthen the nation’s security architecture to end these heinous killings across the country.(NAN)