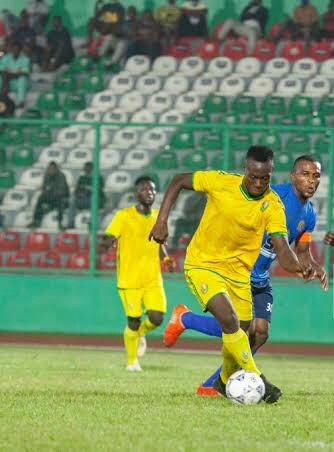 The match, which was keenly contested for by both teams, saw a highly anxious Rovers team fighting relegation put in all they had to secure victory.

In the 36th minute of the game, the front line of the home team combined to set up Daniel Illevbare who, however, failed to convert the opportunity.

Rovers continued piling pressure on the visitors and in the 40th minute another opportunity begging for conversion failed when Junior Ndukwu shot over the bar.

Their efforts, however, paid off in the additional time of the first half when Emmanuel Odafe’s shot from outside the 18 yard box beat the Delta Force goalkeeper and nestled at the back of the net.

Although, the visitors responded with a slick movement that almost resulted in an equaliser, Rovers’ goalkeeper, Isa Ismaila pulled an exceptional save to deny the visitors the equaliser.

Rovers’ search to increase their goal tally in the last 45 minutes of the match was unsuccessful against a resilient Delta Force defence line.

Speaking to the News Agency of Nigeria (NAN) after the match, Technical Adviser of Rovers of Calabar, Mr. Samson Unuanel, described the match as difficult, even though they had planned to win by all means.

“It was a difficult match, Delta Force FC are gunning for a play off spot in the league, while we are running away from relegation, so I thank God for the victory.

“Few weeks ago, we were second on the league table with two additional home games, suddenly everything I put into the team to make it successful were thrown away and today, we are fighting relegation, something is definitely wrong somewhere,”Unuanel said.

Rovers of Calabar currently occupy the 11th position in Group B1 of the NNL with 22 points, having won only one out of their last nine matches. (NAN)