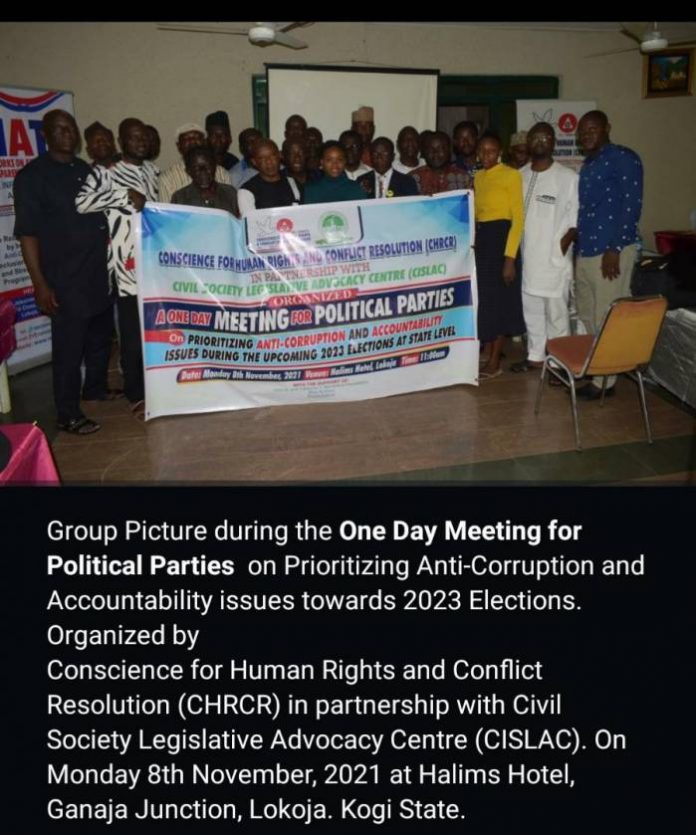 A CSO, the Conscience for Human Rights and Conflict Resolution (CHRCR), on Wednesday urged political parties to come out with deliberate policies that would ensure gender inclusion in politics.

The Executive Director of CHRCR, Idris Miliki, gave the advice at a one-day meeting for political parties on ”Prioritising Anti-Corruption and Accountability Issues Towards 2023 Elections,” at State level in Lokoja.

The meeting was organised by CHRCR in partnership with Civil Society Legislative Advocacy Centre (CISLAC).

Miliki stressed the need for various political parties to deliberately develop policies on women recruitment in politics, while urging the women to take responsibility and be actively involved.

According to him, men have the advantage but women themselves have not studied the political parties system to see how they can come in.

”If women cannot be elected they can be appointed and also be a member of several committees and institutions by political parties.

”We are not saying that political party is about winning elections alone, but women should be members of political parties of their choice.

”If you are members of political parties you must be active and attend all meetings irrespective of time even at night,” Miliki said.

He emphasised that there were women who are doctors, nurses, military, police and pilots that work in the night, hence the night meetings by political parties should not discourage women from being actively involved in politics.

”Women must not be intimidated in politics and can be elected in any elective position like chairman, vice chairman of every political party.

”People should not hide under pretence of religion and culture and be depriving the women of their fundamental human rights; a woman can be anything like any man.

He, therefore urged the women to be committed and invest their time and resources in politics and take their destinies into their hands by being politically relevant.

The executive director also urged political parties to incorporate anti-corruption and accountability in their manifestoes to serve as guide to prospective candidates that would win elections on their behalf.

READ ALSO:Ayoola Breaks Silence Over Allegations Of Relocating Without The Knowledge Of Team Members

He noted that the project’s goal was to reduce corruption in Nigeria by bolstering support for Anti-Corruption, and Social inclusion among critical groups and strengthening policies and programs for Anti-Corruption at the State level as Nigeria prepares for elections in 2023.

He commended journalists in the state for stepping up on their reportage on anti-corruption crusade through their various media organisations.

He noted that political parties and their candidates did not keep to their campaign promises which was one of the reasons for disenchantment of the citizens in governance.

He stressed that the civil society would strictly monitor, as part of the project,ĺcampaign promises of selected political parties to ensure that citizens were not short-changed in governance.

He added that the CSO would ensure documentation of campaign promises by political parties and their candidates, and strictly follow up on them.

He, however called for continuous interactions to improve the relationship between the citizens and the political parties.

They said they had learnt a lot from the meeting as they were more equipped and better informed about the roles of political parties in the political settings, especially on anti-corruption  and gender inclusion in politics. (NAN)