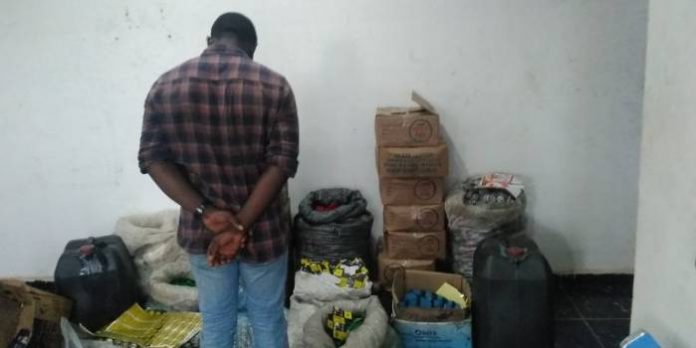 The National Agency for Food and Drug Administration and Control (NAFDAC) on Tuesday nabbed a 30-year-old man for counterfeiting products and the use of fake registration number in Onitsha, Anambra.

She said the suspect was handed over to the agency by the police in Onitisha for further investigation and prosecution.

She mentioned some of the products and items recovered to include, several cartons of olive oil, balm, 100 litres of paraffin oil as raw material, corks, bottles and labels of various kinds designed for the fake products.

She said the agency would do all within its powers to unravel other syndicates and accomplices in the criminal acts.

According to Esenwah, the area commander of police in Onitsha, handed over the suspect to the office of investigation and enforcement directorate of NAFDAC on Tuesday.

“The suspect was caught with all the items displayed and he is involved in illegal packaging of olive oil and products of other companies.

“The suspect was also caught with 100 litres of paraffin oil with which he produces the products being packaged into the bottles.

“We recovered 13 cartons of counterfeited olive oil of different brands, 100 litres of paraffin oil, balms, different labels, printing materials, cartons of empty bottles and corks among other items used for the packaging of the counterfeit products.

“The olive oil and one of the balms had NAFDAC registration number on them. The products are fake and I can tell you that they are hazardous and injurious to health.

“We are continuing with our investigation to unravel all these and to get the accomplices in the crime,” he said.

At an interview, the suspect who gave his name as “Odii Chigoziam”, a secondary school leaver, said he had been in the business of faking the olive oil and others since 2015 and had been based in Onitsha.

He said that he faked the products and had used the NAFDAC registration number on the labels of original products to make the products look real.

The suspect claimed that he had made several attempts to register his own products with the NAFDAC but failed due to the certain conditions of the agency.

According to him, most of the raw materials used for production are purchased from the open market.

“I am the sole producer, I have no company, I started this business since 2015.

“I stop my education in secondary school, I know that the products are counterfeit but I would not have been faking the products if NAFDAC had approved my products. I produce and sell the counterfeited products based on demand,” the suspect said.(NAN).