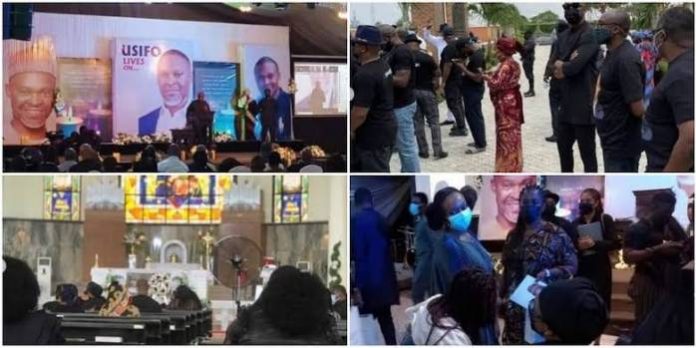 The remains of slain CEO Super TV Michael Usifo Ataga were interred on Friday in a private ceremony at the Ebony Vaults in Ikoyi, Lagos.

Tears flowed freely from family members, close associates and other sympathisers at the venue of the quiet ceremony.

The burial was preceded by a service of songs held in his honour at The Incubator in Victoria Island on Thursday, July 30.

His wife, Brenda, spoke about how surprised she was to hear about his demise while she was actually waiting for him to walk into the surprise birthday party organised to mark his milestones.

She said finding out about his demise was the worst news ever. She said she had looked forward to seeing the look on his face if he had walked into the surprise birthday she had planned for him.

“Sifo, you had a heart of gold, a pure heart, you were kind, patient, humble, fun, loving. You could intrigue a room for hours. Such positive energy.

“Finding out of your demise was the worst news imaginable. My mind had raced through all the possibilities of where you were and what could have happened but death, death wasn’t an option.

“The girls and I were looking forward to seeing you, to celebrate your milestone.

“I had imagined how surprised you would be when you walked in to see a place set up for you. I had imagined the infectious smile.

“Now, I’m yet to comprehend the stark reality that your life was cut short in your prime, at a renaissance of all you had toiled for. .. I’m lost for word,” she said

“It took death for me to know how loved he was. He has been robbed of the joy of seeing a project he spent seven years working on.

“He has been denied the joy of seeing his children grow up, go to the university, get married and make him a grandfather.

“These are wishes of every parent. His love for his children cannot be quantified. No way!”
Osifo was found in the pool of his blood in a short stay apartment in Lagos after his family declared him missing.

A 21-year-old undergraduate of the University of Lagos (UNILAG), Chidinma Ojukwu, was arrested by detectives in connection with his death.

Ojukwu, who had confessed killing Ataga when she was paraded by the police some weeks ago, later made a u-turn, saying she had no hand in his death.

The suspect is still in custody while the police have announced the arrest of more suspects.