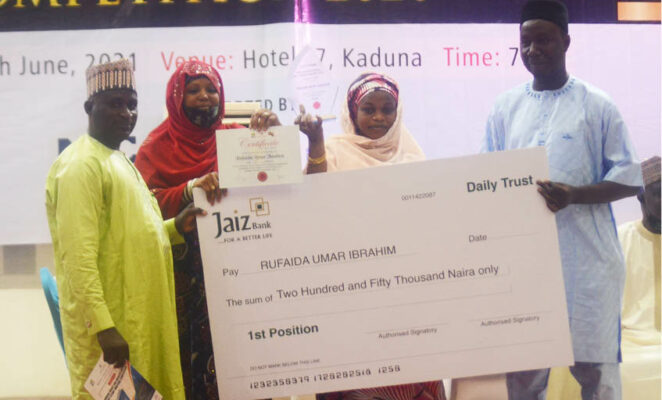 The competition was organised by Media Trust Limited in partnership with Gandun Kalmomi and Open Arts.

The contest was on short stories written in Hausa language, and winners were presented with their awards at a ceremony on Saturday in Kaduna.

Mrs Umar-Ibrahim’s story, “Dimokuradiyyar Talaka”, was selected as the best, while two others came second and third in the contest.

She said she was inspired to start writing by the love she has for reading.

“Initially, I was writing on paper but in 2014, I published my story “Mahaifiya” in a Facebook group,” she said while receiving the award.

“Dimokuradiyyar Talaka” was the story of a young man, who abandoned everything and joined the campaign train of a candidate whose promises encouraged him to start dreaming about a better future.

He was however jailed at the instance of a local government chairman and after his release from prison, returned home to find his mother dead.

He said that apart from discovering talented authors, the contest was also to encourage parents to allow their children to embrace the language.