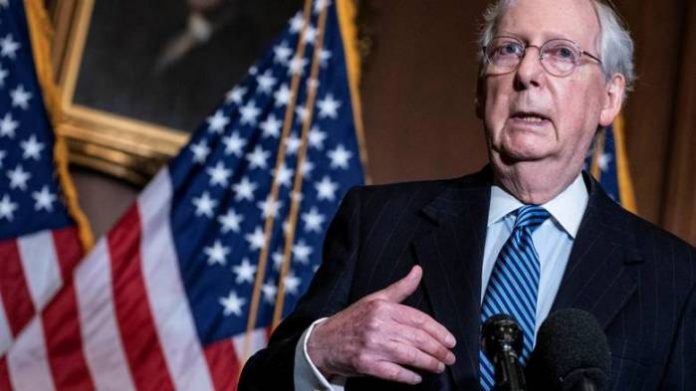 Relations with the Senate, currently controlled by the Republicans, will be crucial to Mr. Biden’s presidency.

He visited Atlanta, Georgia, to campaign for the Democrats in next month’s Senate run-off elections. Two seats will be decided on 5 January and could determine whether or not his party takes control of the chamber. Democrats already control the House of Representatives.

After Monday’s confirmation of Mr. Biden’s victory, three world leaders whose refusal to congratulate the president-elect had been commented widely, did so on Tuesday: Russia’s Vladimir Putin, Brazil’s Jair Bolsonaro and Mexico’s Andrés Manuel López Obrador.

How did McConnell break ranks?

Speaking on the Senate floor, Mr. McConnell said he had hoped for a “different result” from the 3 November election but the electoral college had spoken. “So today I want to congratulate President-elect Joe Biden,” he said.

Also congratulating Mr. Biden’s running-mate, Kamala Harris, he added: “All Americans can take pride that our nation has a female vice president-elect for the very first time.”

Mr. Biden said later he had phoned Mr. McConnell to thank him for the congratulations and the two had agreed to “get together sooner than later”.

Senate Democratic Leader Chuck Schumer urged Mr. Trump to “end his term with a modicum of grace and dignity”.

“For the sake of our democracy, for the sake of peaceful transition of power, he should stop the shenanigans, stop the misrepresentations and acknowledge that Joe Biden will be our next president,” he said.

President Trump does not appear to be changing his stance. Tweeting on Tuesday, he said without offering evidence that “tremendous evidence” of voter fraud was “pouring in”.

What happens in Georgia?

When Mr. Biden takes over the White House on 20 January, he will be looking for the support of both chambers of Congress to carry out his election promises.

While Democrats control the House, in the Senate Mr. McConnell’s party has 52 of the 100 seats. But this could change in January when the two separate run-offs are held in Georgia.

In both races, a Republican incumbent faces a Democratic newcomer: Senator David Perdue, 70, will compete against Jon Ossoff, 33, a documentary filmmaker, while Senator Kelly Loeffler, 50, is up against Rev Raphael Warnock, 51, a senior pastor at an Atlanta Baptist church.

Speaking at a drive-in rally in Atlanta on Tuesday, Mr. Biden thanked voters for having faith and “standing strong”, saying: “Your voice was heard, your votes were counted, and counted and counted again. I’m starting to feel like I won Georgia three times.”

But he emphasised that to get things done, he needed two Democratic senators – “not two senators who are just going to get in the way”.

“Send me these two men and we will control the Senate and we will change the lives of people in Georgia,” Mr. Biden said, adding that the Senate should have passed a Covid relief package “months ago” but was doing “nothing”.

Recent polls suggest Mr. Warnock is pulling ahead of Ms Loeffler, while the Perdue-Ossoff race in a dead heat.

If the Democrats win both seats, the Senate will be evenly divided – but it will still be a win for the Democrats. US vice-presidents have the power to cast tie-breaking votes in the Senate, meaning that with Vice-President-elect Harris on board, Democrats would effectively control both chambers.