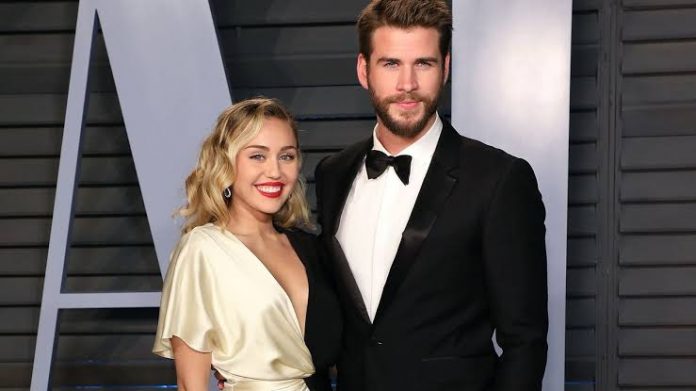 In the four days since their separation was announced, speculation has been swirling on what caused the couple to break-up just seven months into their marriage.

Shocking claims of drug use and infidelity are now emerging as insiders from both sides give drastically different stories regarding the breakdown of the duo’s relationship.

Sources close to Miley, 26, told TMZ the songstress tried ‘valiantly’ to save the marriage but couldn’t accept Liam’s ‘drinking a lot’ and ‘using certain drugs’.

Miley’s struggles with substance abuse in the past meant it was a ‘dealbreaker’ for the actress and especially hard for her to move past.

Sources on Liam’s side are calling bulls**t, according to TMZ, and say the real issue was Miley’s infidelity.

The Hunger Games star’s pals say the Wrecking Ball singer is using the drug and alcohol accusations to distract from the real cause of the split.

No further details were given by Liam’s source.

‘This is another attempt by Miley to distract from her infidelity and recent outrageous public behavior,’ the Liam source told TMZ.

The couple – who dated on and off for 10 years – announced their split over the weekend after just seven months of marriage.

Meanwhile, separate sources claimed to Page Six this week that Australian born Liam, 29, was hoping to have ‘a normal, settled-down life’ with his wife, while Miley appeared to be headed back to her famously wild ways.

Following their initial split in 2013 – before reconciling in 2016 – Miley famously became something of a wild child when she appeared on-stage in nude PVC lingerie at the VMAs and ‘twerked’ on Robin Thicke.

After toning down her wild ways when they reunited, sources seem to believe that Miley’s return to ‘old Miley’ and her raucous behavior caused an issue for Liam.

Another source denied Miley was ever unfaithful to Liam, telling Page Six: ‘She never hooked up with girls while she was married. It wasn’t a part of the relationship.

‘There was no hooking up behind his back or with his knowledge,’ they said

On Tuesday, Liam broke his silence on the split, two days after pictures of her and Kaitlynn kissing emerged.

He shared a photo to Instagram of a beach at sunset alongside a brief caption addressed to his fans after it was claimed that they have been separated for months.

He penned: ‘Hi all. Just a quick note to say that Miley and I have recently separated and I wish her nothing but health and happiness going forward… Peace and Love.’

A rep for Miley said on Saturday: ‘Liam and Miley have agreed to separate at this time. Ever-evolving, changing as partners and individuals, they have decided this is what’s best while they both focus on themselves and careers,’ the statement read.

‘They still remain dedicated parents to all of their animals they share while lovingly taking this time apart. Please respect their process and privacy.’

Soon after, reports emerged claiming that Miley desperately tried to save her marriage to Liam before they quietly separated ‘months’ ago.

As reported by TMZ, the Party in the USA hitmaker wanted to go into therapy with her husband to fix their relationship but ‘he didn’t come close to meeting her half way.’

The last footage of the couple out in public together was taken on July 9, where they looked decidedly unhappy.