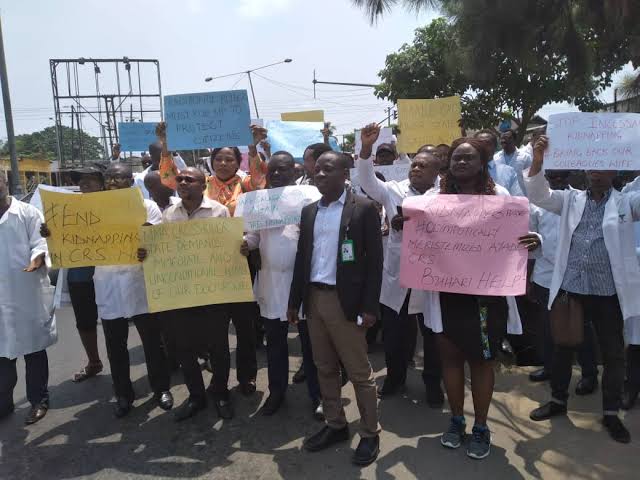 The Medical Women Association of Nigeria (MWAN), Cross River Chapter and other women organisations on Tuesday staged a peaceful protest against kidnapping in the state.

The peaceful protest, which was organised by the Medical Women Association in the state, went round major routes in Calabar metropolis.

Other women groups that participated in the protest include International Federation of Women Lawyers, Holy Child Old Girls Association, Nigerian Women of Journalists and Presbyterian Women.

Speaking, Dr. Bassey Nakanda, President of MWAN in the state, said the protest was to draw the attention of the state government, security agencies and other stakeholders on the need to end cases of kidnapping in the state.

She pointed out that medical women had continued to suffer incessant kidnappings in the state with the recent one of Dr. Vivien Otu, who was kidnapped on Aug. 28, in Calabar and released on the night of Sept. 3.

“Medical women and others have become victims of kidnapping in Calabar and this act is totally condemnable. When it comes to kidnapping, the trauma that women go through lives with them forever; they are beaten, raped and humiliated.

“We are all aware that they have been several cases of kidnapping in Calabar and as women, we need to stand up, speak and fight for ourselves. Calabar used to be the most peaceful state in Nigeria but we are now leaving in fear.

“We need to visit the government, royal fathers and security agencies to register our complaints,” she said.

She called on all residents in the state to always report abnormal movements of suspected persons around them to security agencies.

Mrs. Agnes Otu from Holy Child Old Girls Association while speaking, also called on the state government and relevant security agencies to be proactive in safeguarding lives and properties of the residents.