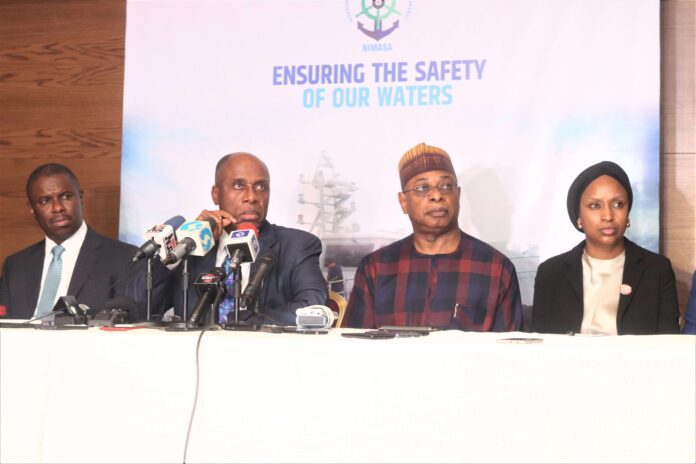 The Federal Government has said it will deploy its integrated maritime security infrastructure to comprehensively tackle insecurity on Nigeria’s territorial waters and exclusive economic zone.

Minister of Transportation, Mr. Chibuike Rotimi Amaechi, stated this in Lagos while briefing newsmen ahead the launch of the Integrated National Security and Waterways Protection Infrastructure, also called the Deep Blue Project.

The minister, who addressed the press alongside heads of agencies under his ministry, also explained the government’s decision to end the secure anchorage project, a private security initiative run outside the country’s port system.

He insisted that all ships coming into the country must anchor at the national ports under the Nigerian Ports Authority (NPA).

The Director-General of Nigerian Maritime Administration and Safety Agency (NIMASA), Mr. Dakuku Peterside, while expatiating on the Deep Blue Project, said 80 per cent of the assets required for the take-off of the total spectrum maritime security architecture would be deployed by June.

He assured that the Deep Blue Project, when fully operational, would drastically reduce piracy and other crimes within Nigeria’s maritime domain and the Gulf of Guinea.

The minister stated: “Recall that we secured an approval from the Federal Executive Council to introduce a maritime security architecture, which is coming to fruition. We engaged the Homeland Security International (HLSI), who is only to provide training and equipment, while the Nigerian Navy would lead the Police, Nigerian Army and Department of State Services, among others that would run the equipment.”

He stated that security of the maritime sector needs a more holistic approach, hence the need to involve other arms of the country’s security services to support the Nigerian Navy working with NIMASA.

Giving a breakdown of the assets being installed under the Deep Blue Project, Peterside revealed that a good number of the assets had arrived the country, including six interceptor boats and a special mission vessel, saying a second one will come in before the end of February.

Peterside stated: “We expect the first helicopter in the first quarter of this year. Almost all the communication gadgets are in the country as well as the Personal Protective Gear (PPG). The C4i centre is fully operational in Kirikiri, the NIMASA Research Centre. Those are the assets we have on ground.

“However, between now and June this year, over 80 per cent of the assets would be in the country and they would be manned by Nigerian military.”

Peterside stated that the training aspect of the project had since commenced in phases, saying the first set of training for C4i operators and intelligence officers had been concluded.

He added that basic infantry training for soldiers who would fight on land around the littoral areas had also been concluded and the soldiers awaiting deployment, according to him.

“These trainings would continue over time as we try to integrate the intelligence officers with the C4i and those operating the special mission vessels and aircraft,” Peterside said.