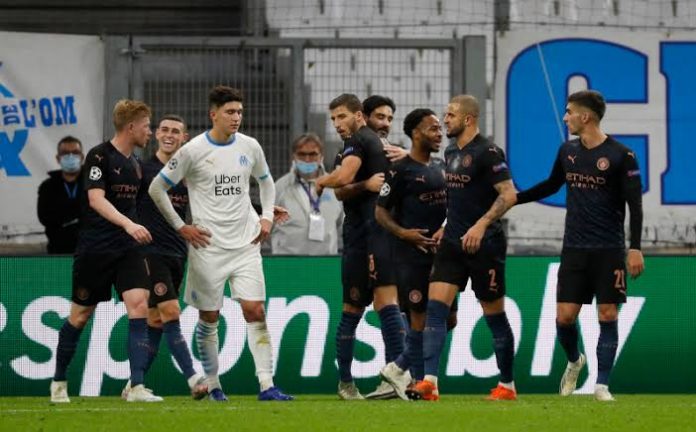 Manchester City were barely troubled as they claimed their second victory in UEFA Champions League Group C by beating Olympique de Marseille 3-0 at the Stade Velodrome on Tuesday.

Ferran Torres, Ilkay Gundogan and Raheem Sterling found the back of the net as Pep Guardiola’s side stayed top of the standings on six points, three ahead of FC Porto and Olympiakos.

Marseille are bottom of the table on zero points after their 10th consecutive loss in the competition.

This was since two defeats in the quarter-finals against Bayern Munich in 2012 and after six defeats in the group stage in 2013-14, in their last appearance.

OM, who lost 1-0 at Olympiakos on their return to the Champions League after a seven-year hiatus, travel to FC Porto.

Manchester City host Olympiakos in the next round of matches on Nov. 3.
Guardiola was delighted with his side’s performance.

“We didn’t concede much, hardly anything,” he said. “We were absolutely under control. We were patient, we were so aggressive without the ball… we played really well.”

“It’s true that it’s a defeat that is hard to take,” said OM midfielder Florian Thauvin. “We knew that they’d have control of the ball and we decided to sit deep and play on the counter.

“Unfortunately, we didn’t put into place what we wanted to. It’s a different level and we have to be honest about that.”

After their 3-1 home win against Porto last week, Manchester City got off to a dominant start, pushing Marseille back and winning three corner-kicks in the opening 10 minutes.

Marseille were shambolic at the back and paid for it in the 18th minute when Valentin Rongier inexplicably passed the ball to Kevin De Bruyne on the edge of the box.
Torres simply buried it in the net after being set up by the Belgian.

Oleksandr Zinchenko came close to making it 2-0 when his crossed shot shaved Steve Mandanda’s left-hand post after another piece of horrible defending from the hosts.

Marseille were a bit more lively after the break, defending higher up, and Thauvin came close in the 55th minute, only for his 25-metre missile to be tipped on to the post by Ederson.

Sterling wrapped it up five minutes later, tapping the ball home from De Bruyne’s cross at the end of a long spell of possession.
Reuters/NAN