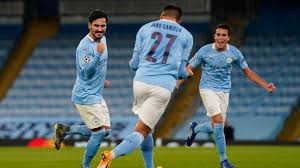 Manchester City came from behind to make a winning start in the UEFA Champions League Group C on Wednesday with a 3-1 victory over FC Porto at the Etihad Stadium.
FC Porto grabbed a 14th minute lead when Manchester City’s Ruben Dias, a recent signing from Benfica, gave away the ball.

Colombian winger Luis Diaz cut in from the left, burst diagonally across the Manchester City defence and shot into the far bottom corner of Ederson’s goal.

Pep Guardiola’s side were soon back on level terms though.

Manchester City were far from their flowing best but went in front in the 65th minute.

A perfect, curling free-kick from Gundogan rose over the wall and beyond the reach of FC Porto goalkeeper Agustin Marchesin.

Substitutes Ferran Torres and Phil Foden then combined to make it 3-1.

The Spaniard collected a return pass from the England midfielder before gliding into space and driving a right foot shot into the far corner.