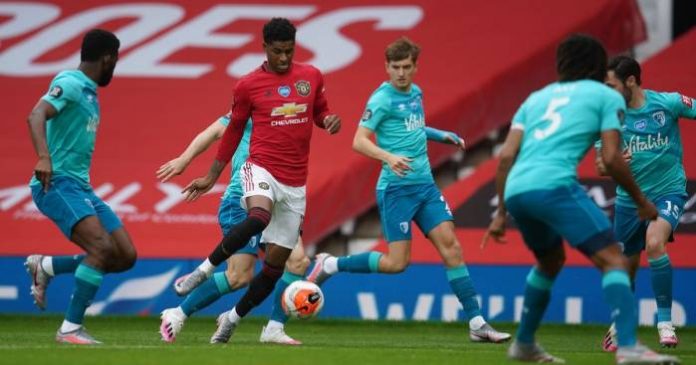 Marcus Rashford believes these are “exciting times” for Manchester United after the team scored five goals in a Premier League match at Old Trafford for the first time since 2011 to thrash Bournemouth 5-2 and move into the top four on Saturday.

Rashford and Anthony Martial took their tallies for the season to 20, but they were upstaged by two more stunning strikes by teenager Mason Greenwood.

The front three with an average age of 21 have now combined for 55 goals this season.

“It’s definitely an exciting time,” Rashford told BT Sport. “We are all in goalscoring form; Mason has been on fire, Anthony has been on fire. They’ve been brilliant all season and it’s important to push on now.”

Victory takes Ole Gunnar Solskjaer’s men a point above Chelsea into fourth as they extended an unbeaten run stretching back to January to 16 games.

The Norwegian was delighted with another display of attacking football the sides he played in under Alex Ferguson would have been proud of, but was disappointed that no fans were inside Old Trafford to see it.

“The energy in the team, the goals we score, the will and intent to go forward, it’s just too bad we couldn’t get the fans inside,” said Solskjaer. “That’s a game for the fans definitely, it’s one that the Stretford End would enjoy.”

The only other concern for Solskjaer was a few defensive lapses from a side that had kept 11 clean sheets in their previous 15 matches without defeat.

Harry Maguire and David de Gea were at fault for the only points the Red Devils have dropped since the Premier League’s restart in a 1-1 draw at Tottenham.

Both were culpable again as Junior Stanislas nutmegged the world’s most expensive defender and then fired in at De Gea’s near post completely against the run of play on 16 minutes.

Those errors were not as costly this time as Greenwood, Martial and Rashford quickly turned the game around.

Greenwood’s star is rising fast and the 18-year-old blasted home from Fernandes’s pass to get United back on track.

The hosts were then gifted a second by Adam Smith’s handball inside the area and Fernandes stepped aside to let Rashford net for the first time since January.

Martial completed the set with a stunning strike from outside the box to reach the 20 goals mark for the first time in his career.

The game appeared to be over at the break, but a sloppy start from United presented Bournemouth with a route back into the game.

Eric Bailly replaced Victor Lindelof at half-time and the Ivorian handled as he tried to control a loose pass from Nemanja Matic.

Josh King, who was a United target in January as Solskjaer desperately looked for cover for the then-injured Rashford, dispatched the penalty and moments later Bournemouth had the ball in the net again only for Arnaut Danjuma to be flagged offside.

As in the first half, United’s response was quick and emphatic. Greenwood smashed home his 15th goal of the season on his supposedly weaker right foot to restore a two-goal lead.

“He’s a fantastic goalscorer,” added Solskjaer. “Especially the second one, you know he’s got a left foot to come inside, now defenders will have to think about the outside as well because he can score with his right.”

The signing of Fernandes has been the catalyst to United’s turnaround before and after a three-month stoppage due to the coronavirus lockdown and the Portuguese midfielder took his tally to seven goals in 14 games by hooking a free-kick in at Aaron Ramsdale’s near post.

Rashford also had another goal ruled out for offside, but United were happy to settle for five as they moved into the top four for the first time since September.

Bournemouth remain second bottom and without a point in four games since the Premier League’s restart. (Punch)