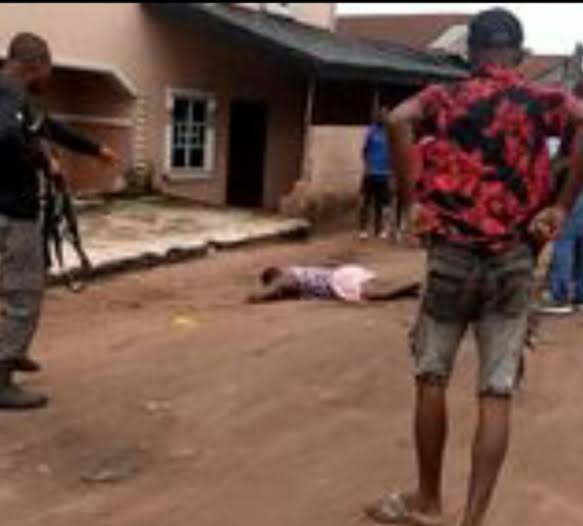 Residents of Umuokoto town in Umudibia Autonomous Community in Owerri West Local Government Area of Imo State were thrown into mourning when a man identified as Obum stabbed his wife and a pastor of Redeemed Christian Church of God (RCCG) to death on Friday.

While the pastor died immediately, his wife died minutes later from excessive beating and bleeding.

The man, a tenant and native of Obowo in Imo State, suspected to be mentally unstable, was said to have stabbed his wife severally before killing the pastor, Thompson Onyekuru, who was returning from a meeting of Umuatum two compounds from where he met his death.

According to eyewitnesses, the incident started around 4pm when Obum’s wife, Ogechi and her one- year- old son were heard screaming for help.

The cry attracted the attention of neighbours and passersby, including youths within the village who noticed the man attacked the wife in their living room.

“As the crowd intensified effort to rescue the woman, Obum with a knife, threatened to kill anyone who tried to stop his action,” one of them said.

By the time they succeeded in seizing him, they found the woman covered in the pool of her blood with her face inflicted with bruises.

Noticing his wife had been taken away for medical attention, Obum became more aggressive, chasing everyone with knife.

It was at this point he met the Pastor who had mediated in their quarrel prior to the incident and stabbed him from behind, the eyewitness said.

The eyewitness said Obum’s aggressiveness and stabbing of the pastor coincided with arrival of the police operatives from Nekede/Ihiagwa Divisional Police Station who immediately shot him in the leg.

It was learnt the dispersed youths regrouped and descended on the man with clubs.

It was gathered that the man died on the way to the hospital.

Confirming the incident, President General of Umuokoto Community Council (UCC) Hon. Charles Anozie said Obum and the pastor were rushed to the hospital where they later died.