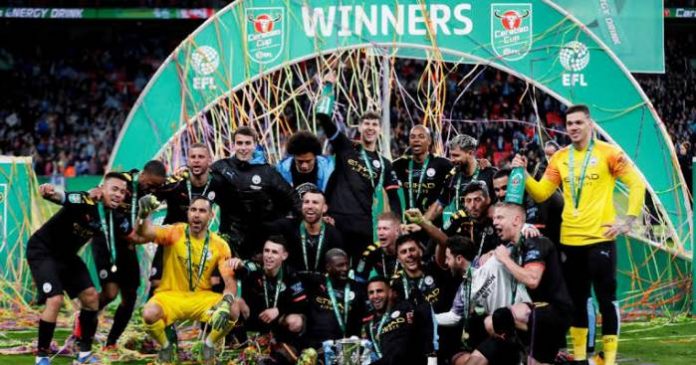 Manchester City claimed the Carabo League Cup for the fourth time in five seasons by beating Aston Villa 2-1 at Wembley on Sunday thanks to goals from Sergio Aguero and Rodrigo.

Mbwana Samatta pulled a goal back for Villa, but their wait for the club’s first silverware since 1996 goes on as Pep Guardiola’s men have now won six of the last seven major trophies in English football.

Guardiola made eight changes from the side that won 2-1 at Real Madrid in the Champions League on Wednesday with Kevin De Bruyne among those left on the bench.

However, it mattered little as City had the luxury of recalling Aguero, Raheem Sterling and David Silva to the starting XI, and the gulf in class showed.

Guardiola’s raft of changes also handed a rare start to Phil Foden and the 19-year-old more than justified his selection.

Rodrigo’s fine pass picked out Foden to head back into the path of Aguero and the Argentine’s deflected effort beat Orjan Nyland in the Villa goal to open the scoring on 20 minutes.

Foden was then inches away from a goal himself with a deflected shot that flew inches wide.

Villa felt aggrieved when City were awarded another corner moments later after Jack Grealish fired the ball off Ilkay Gundogan for what should have been a goal kick.

Instead, City doubled their lead as Gundogan’s corner was met with a powerful downward header from Rodrigo.

Villa could barely even get a touch for the next 10 minutes as the holders threatened to run riot in a repeat of the 6-1 thrashing they handed the hosts at Villa Park last month.

Sterling had a glorious chance for his first goal of 2020 deflected behind by a brave block from Tyrone Mings.

But moments later the reason Mings is ahead of John Stones in the pecking order for England selection became clear as the City defender inexplicably fell to the floor to give Villa a lifeline.

A long ball forward eventually came to Anwar El Ghazi and from his cross, Samatta headed low past Claudio Bravo to the delight of the travelling thousands from Birmingham and Villa fan Prince William in the stands.

The difference in the desperation for success between the supports was obvious as Villa were roared on vociferously throughout, while City failed to sell out their allocation.

That did not compensate for the difference in quality on the field as City quickly settled back into their rhythm and could then introduce De Bruyne for the final half-hour.

However, City failed to turn their dominance into more goals as Rodrigo was denied by a fine save by Nyland from another corner before Aguero then fired into the side-netting to give Villa hope for the last 10 minutes.

And they were very nearly punished as the often-criticised Bravo had to make a brilliant save three minutes from time to turn Bjorn Engels’ header onto the post and maintain City’s grip on the competition.