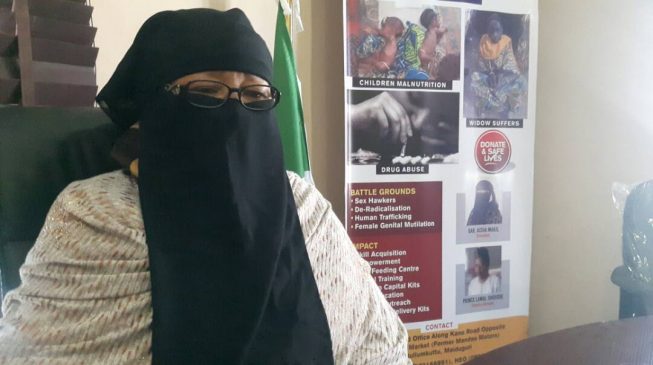 Aisha Alkali Wakil, better known as Mama Boko Haram, has been arraigned before the Borno State High Court, Maiduguri on a three-count charge of conspiracy and cheating to the tune of N66million.

The legal practitioner and founder of Complete Care and Aids Foundation, a Non Governmental Organisation, was arraigned before Justice Aisha Kumaliya alongside Tahiru Saidu Daura, programme manager of the NGO.

Wakil had on several occasions interfaced between the federal government and Boko Haram.

The two were arraigned by the Economic and Financial Crimes Commission, EFCC.

The prosecution of the two followed a petition written by one Ali Tijjani, the CEO of AMTMAT Global Ventures against Wakil’s NGO, Complete Care and Aids Foundation.

He further alleged that his company upon the request of the defendants equally processed and funded their trip to Morocco to the tune of N51million, a cost they refused to defray.

Count two of the charge reads: “That you Tahiru Saidu Daura, while being a programme manager of Complete Care and Aid Foundation, and Aisha Wakil, being the CEO of Complete Care and Aid Foundation on the 7th September, 2018, in Maiduguri within the jurisdiction of this honourable court, dishonestly induced Ali Tijjani, the CEO and alter ego of AMTMAT Global Ventures to deliver to you, processed maize grains (biski), valued at N15,000,000.00 (Fifteen Million Naira) which you are yet to pay and thereby committed an offence contrary to Section 320(a) and punishable under Section 322 of the Penal Code Cap 102 Laws of Borno State.”

The defendants, however, pleaded not guilty to all the charges.

Following their plea, the prosecution counsel, Fatsuma Muhammad applied for a trial date and for the remand of the defendants in the custody of Nigerian Correctional Centre (NCS), pending the determination of the case.

Justice Kumaliya granted them bail in the sum of N30million with two sureties in like sum. One of the sureties the court said, must be someone at the level of a permanent secretary in the civil service, who owns a landed property in Maiduguri GRA, and must submit the title document of the property to the registry of the court.