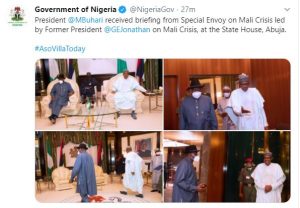 He was accompanied by members of the team on the Economic Community of West African States (ECOWAS) Mission to Mali.

A statement issued by the Special Adviser to the President on Media and Publicity, Femi Adesina, said the visit was to brief President Buhari on the update in Mali.

The statement quoted Jonathan as saying: “We told them that no international organization, including the African Union (AU), United Nations (UN), and others, would agree with their position. We continued to emphasize the need for dialogue.”

The former President added that the Constitutional Court had been reconstituted and inaugurated, while vacancies in the Supreme Court had been filled, thus sorting out the judicial arm of government.

On his part, President Buhari thanked Jonathan for what he called “the stamina you have displayed” on the Mali issue.

He called for further consultations with the Chairman of ECOWAS, President Mahamadou Issoufou of Niger Republic.