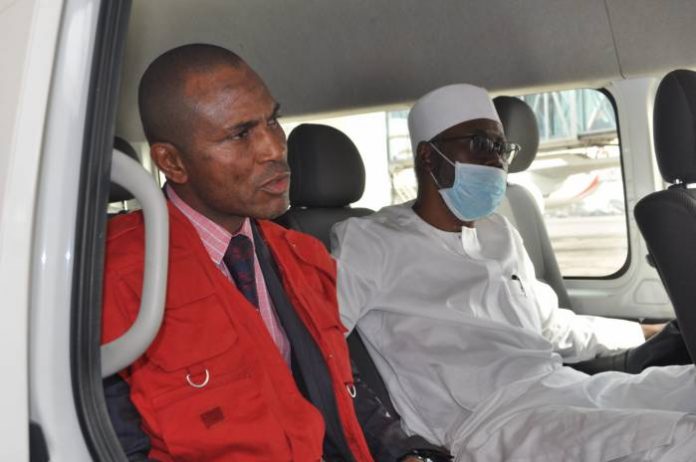 The Economic and Financial Crimes Commission has on Thursday former Attorney General of the Federation and Minister of Justice, Mohammed Adoke (SAN).

He was picked up at the Nnamdi Azikiwe International Airport, Abuja, upon arrival from Dubai, the United Arab Emirates where he had been held by the International Police Organisation (INTERPOL) since November 11, 2019.

He was arrested by the Interpol Unit of the Nigeria Police Force which was waiting for him at the Abuja airport.

The former AGF was accompanied to Nigeria on the Emirates Airline flight 785 by Interpol officers from the UAE.

His arrest in Dubai by the international police followed a bench warrant for his arrest issued by Justice Danladi Senchi, of the high court in Abuja.

The warrant which was later vacated by the court was issued over the charges of fraud preferred against Adoke by the EFCC in connection with the Malabu Oil deal in 2016.

Confirming Adoke’s arrested, the Commissioner of Police in charge of the Interpol, Umar Garba, said that his men arrested and handed Adoke over to the EFCC shortly after his arrival in Abuja.

“We arrested the former AGF and handed him over to the EFCC which requested our assistance.”

The EFCC also confirmed the development in a tweet on its verified Twitter handle on Thursday which equally disclosed that acting EFCC Chairman, Ibrahim Magu, had been meeting with the UAE authorities over his plans to prosecute Adoke for his alleged involvement in the $1.1bn Malabu oil scam.

The EFCC tweet read, “Former AGF, Mohammed Adoke, has arrived in Nigeria from Dubai. The ex-AGF left Dubai following pressure from the EFCC.

“The aircraft departed the Emirati commercial capital at about 11am (8am Nigerian time) and touched down at the Nnamdi Azikiwe International Airport, Abuja, at about 3.45pm.

“Officers of the EFCC were on the ground at the airport when he arrived. The EFCC boss, Ibrahim Magu, and Dubai authorities have held a series of meetings in respect of the former attorney-general. He was accompanied by Interpol officers on Emirates Airlines flight 785.”

Recall that counsel to Adoke, Mike Ozekhome (SAN), who disclosed his return while he was still on his way back on Thursday had expressed confidence that his client would not be arrested upon arrival in the country.

According to him, the Dubai authorities released Adoke from custody because they found nothing incriminating against him.

He said therefore that his client had decided to return on his own volition to clear his name concerning the charges instituted against him in connection with the Malabu Oil deal.

Besides, he said that Justice Binta Nyako of the Federal High Court in Abuja had also in a judgment exonerated Adoke of any wrongdoing in the Malabu Oil transactions.