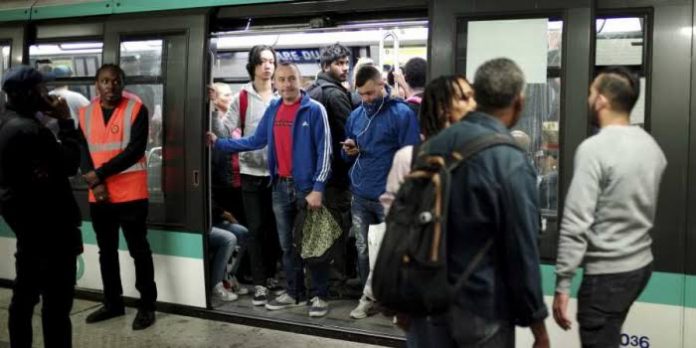 Ten of Paris’s 16 lines were shut and service on the others was disrupted.

Many workers cycled, walked or stayed at home, while free rides were on offer on transport operator RATP’s e-moped and Uber’s e-bike and scooter networks.

The strike, the biggest since 2007, is the first big act against President Macron’s plan for a universal pension.

It would replace dozens of different pension schemes for different professions.

Members of other professions including lawyers, airline staff and medical workers have called for more strikes starting on Monday.

There were 235km (145 miles) of traffic jams in the Paris region, officials said, more than double normal levels.

Local media showed photos of crammed platforms on four metro lines, where some trains were running.

Le Parisien newspaper said a legal requirement to maintain a minimum level of service – in place following a big strike in 2007, which was also against a pension overhaul – was not being fulfilled.

Three of the city’s five regional rail lines, run by national rail operator SNCF, were running as normal but the two other lines were offering a reduced rush hour service and no trains at all during the rest of the day.

Travellers reported a surge in prices on ride-hailing services, with one journalist posting a screenshot showing a ride across the city costing €100 (£90), about three times the usual fare.

Le Parisien newspaper said a legal requirement to maintain a minimum level of service – in place following a big strike in 2007, which was also against a pension overhaul – was not being fulfilled.

The move to a universal points-based pension system would also remove the most advantageous pensions for a range of jobs ranging from sailors to notaries and including Paris opera workers.

On Thursday French Prime Minister Edouard Philippe insisted the reforms would be fair for everyone.

“We’re going to construct a truly universal system where every euro paid in will provide the same rights for everyone, whether a labourer, a shop owner, a researcher, a farmer, a civil servant, a doctor or an entrepreneur,” he said.

The French government wants parliament to vote on the plans early next year.