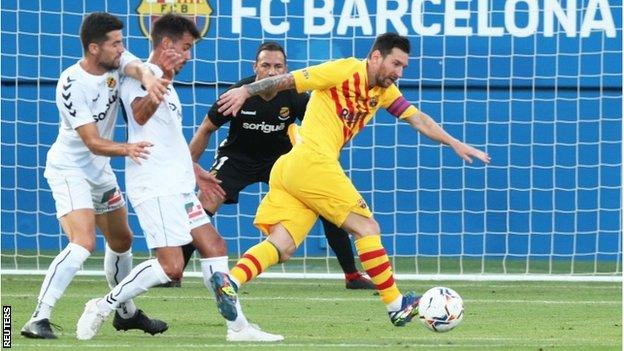 Lionel Messi made his first appearance for Barcelona since his failed attempt to leave the club, playing in their friendly with Gimnastic de Tarragona.

READ ALSO: PDP Congress In Niger Postponed Due To Violence

The 33-year-old Argentine submitted a transfer request in August but decided to stay last week because no club would be able to afford his release clause.

Messi started in the 3-1 win over third-tier Nastic after the club confirmed he would remain as captain.

He was replaced along with the other starters at half-time.

Messi, Barcelona’s all-time leading goalscorer, believed he had a clause in his contract which would allow him to leave for free and did not begin pre-season training.

Barcelona and La Liga insisted that clause was no longer valid – with any club wishing to buy him required to pay a release clause of 700m euros (£624m) – and Messi returned to training after saying he would not take the club to court.

Barca’s season starts on Sunday, 27 September with a home game against Villarreal in La Liga.