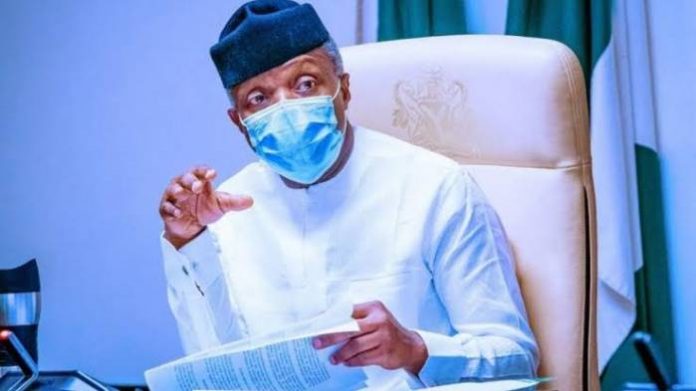 Vice-President Yemi Osinbajo on Monday called for a technology-driven legal system in Nigeria to enable it to remain relevant in the dynamic world.

Osinbajo made the call while opening the 2021 Law Week of the Lagos Branch of the Nigerian Bar Association (NBA).

The theme of the Law Week was: “Disruption, Innovation and the Bar.”

In an address he delivered virtually, Osinbajo said that technological changes had become a major threat to the survival of even the legal profession.

He urged that the profession must keep in tune with changes.

According to him, as in some other sectors that have deployed technology tools, there is now a tilt toward replacement of human legal services with artificial intelligence.

He said that it then meant that the survival of the legal profession was being threatened.

He added that the practice of lumping law students in classrooms for purpose of teaching is fast becoming archaic with technological changes.

“The theme of this year’s law week – Disruption, Innovation and the Bar – is of tremendous importance today,” he said.

According to him, the theme provides the basic idea which legal services will now have to grapple with.

“According to a 2019 Report, 31,000 jobs in the American industry were lost due to automation, and by 2036 that number will grow to over a hundred thousand legal jobs.

“With a continued progression in technology, It is only a matter of time before the times also catch up with us in Nigeria,” he said.

Osinbajo noted that artificial intelligence had become a business model being developed and adopted to solve day-to-day problems.

He said: “For example, Ross is a technology system that can research and offer legal opinion.
“Questions are put to it and it provides answers even touching on case and statute law.

“These phenomenon raises pertinent questions for the legal profession as to how it will deal with these competitive process.”

According to him, it is important for the legal profession to change with the changing circumstaces.
“It is interesting to see that during the recent JUSUN strike, the Supreme Court delivered some judgments by Zoom,” he said.

Osinbajo said that the changes were happening taking place fast.

He, consequently, urged the NBA to rise up to the challenge, take charge and pay attention to the rules of engagement of legal services.