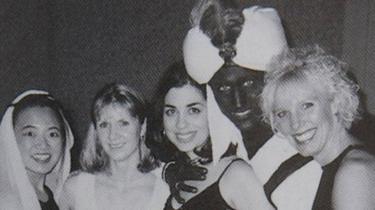 Addressing the image, Mr. Trudeau said he “deeply regretted” his actions and “should have known better”.

The 2001 yearbook picture shows Mr. Trudeau with skin-darkening make-up on his face and hands at the West Point Grey Academy in Vancouver.

The prime minister is battling for re-election on October 21.

The image is politically embarrassing for the prime minister because he has made progressive policies a signature issue.

Speaking to journalists after the Time article was published, Mr. Trudeau said he had dressed up in the photo in an Aladdin costume at an Arabian Nights-themed gala.

“I take responsibility for my decision to do that. I shouldn’t have done it.

“I should have known better. It was something that I didn’t think was racist at the time, but now I recognise it was something racist to do and I am deeply sorry.”

When asked had there been other occasions, Mr. Trudeau told reporters he had also worn make-up while performing at a talent show in high school.

An image from that incident has since been posted to Twitter.

Like “blackface”, “brownface” typically refers to when someone paints their face darker to appear like someone with a different skin colour.

The practice is associated with minstrel performances – in past centuries, white actors could be seen with their faces painted black, caricaturing African-Americans, and perpetuating offensive and racist stereotypes.

In recent years, there have been several controversies involving politicians, celebrities and brands accused of “blackface”, “brownface” or “yellowface”.

On Wednesday, Mr. Trudeau said “brownface” was “a significant thing that is very hurtful” to “communities and people who live with intersectionalities and face discrimination”.

Mustafa Farooq, executive director of the National Council of Canadian Muslims, said: “Seeing the prime minister in brownface/blackface is deeply saddening. The wearing of blackface/brownface is reprehensible, and hearkens back to a history of racism and an Orientalist mythology which is unacceptable.

The council added that it recognised “people can change and evolve over two decades”. Later, the council issued a tweet thanking Mr. Trudeau for apologising promptly.

The picture was racist in 2001 and racist now, said Andrew Scheer, leader of the opposition Conservatives.

“What Canadians saw this evening is someone with a total lack of judgement and integrity and someone who is not fit to govern this country,” he said.

“Any time we hear examples of brownface or blackface, it’s making a mockery of someone for what they live and what their lived experiences are,” Mr. Singh told journalists on the campaign trail in Toronto.

The image was also criticised in a tweet by Green Party leader Elizabeth May.